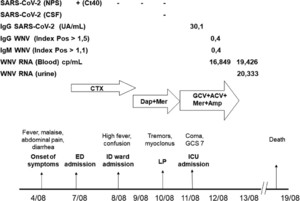 We present a fatal case of West Nile virus meningoencephalomyelitis initially misdiagnosed as COVID-19 in a 63-year-old Egyptian woman with a previous diagnosis of systemic lupus erythematosus. The patient’s medical history and immunosuppressive therapy, as well as the COVID-19 pandemic, substantially broadened the differential diagnosis of her encephalitis.

West Nile virus (WNV) is a Flavivirus transmitted by mosquitoes and is an emerging public health problem in Europe.1 More than 80% of WNV-infected individuals run an asymptomatic course, whereas those who are symptomatic generally exhibit a flu-like syndrome. Severe neuroinvasive disease (i.e., meningitis, encephalitis, and acute flaccid paralysis) is observed in 1% of infected individuals or 10% of those symptomatic, particularly elderly and immunocompromised subjects.2 A variable diffusion of WNV has been recorded in Europe since 2008, with an alarming recrudescence observed in 2018 when 2083 autochthonous infections were registered. Of those, nearly one-third (576 cases) were reported by Italy.3

As of November 4, 2020, Italy has recorded 68 cases of WNV infection, 45 of which were of neuroinvasive disease.4 As compared with previous years, surveillance data indicate that WNV circulation in mosquitoes, equids, and humans was less intense in Italy during 2020, and in our region (Lombardy), it had a delayed onset.5 Herein, we describe a fatal case of WNV meningoencephalomyelitis observed during the summer in Milan, Italy, in an Egyptian woman who was initially diagnosed as affected by COVID-19.

A 63-year-old woman with a long-standing history of systemic lupus erythematosus (SLE) and lupus nephritis (stage IV chronic kidney disease) under immunosuppressive therapy with azathioprine and steroids since 1999, type 2 diabetes mellitus, and severe coronary artery disease was referred to the Luigi Sacco Hospital on August 8 because she had tested positive for SARS-CoV-2 RNA by real-time PCR performed on a nasopharyngeal swab (Figure 1). The day before, she had been admitted to the emergency department (ED) of another hospital complaining of 4-day history of malaise, fever (38°C), abdominal pain, and diarrhea. The patient had been living in the metropolitan area of Milan during the previous year, without returning to Egypt for the whole period. In the ED, a chest computed tomography (CT) scan revealed a small nodule on the right inferior lobe, whereas a CT scan of the abdomen was reportedly negative, except for small kidneys. Blood tests were notable for mild leukocytosis (white blood cell count 11,060/μL), thrombocytopenia (77,000/μL), and increased serum creatinine concentration (2.3 mg/dL). Both Legionella and pneumococcal antigens were absent in the urine. She was empirically treated with intravenous ceftriaxone (2 g/day) and transferred to our hospital. On admission, her vital signs were within the normal range, and no oxygen supplementation was required. She appeared to be cognitively intact, albeit unable to communicate because of complete linguistic barrier. Antibiotic therapy was maintained, and subcutaneous enoxaparin, dose-adjusted at 2,000 UI per day owing to the reduced renal clearance, was added to her chronic regimen of prednisone (12.5 mg/day). The same night, she developed confusion and agitation, which were interpreted as delirium; haloperidol was introduced, with apparent benefit. On August 9, the patient developed high fever (up to 39°C) with persistence of confusion. Her vital signs were stable, blood cultures were ordered, and the antibiotic regimen was modified, introducing daptomycin and meropenem. The following day, the persistence of high fever associated with a worsening mental status prompted a neurology consultation which was remarkable for the presence of coarse tremors and myoclonus of the extremities. A CT scan of the brain was performed without contrast and did not reveal intracranial abnormalities. The lumbar puncture revealed a clear, colorless cerebrospinal fluid (CSF) with an opening pressure of 12 cm H2O. CSF analysis was notable for the following: pleocytosis (white blood cell count: 108/μL, 68% of which were mononucleated); a glucose concentration of 62 mg/dL (glycemia of 98 mg/dL); and a protein concentration of 1,080 mg/L (normal range: 150–400 mg/L). Ampicillin was added to the antibiotic regimen, as well as acyclovir plus ganciclovir (the latter because CMV serology gave a positive result: IgM 75.7 U/mL, > 22 positive). All the results of the analyses requested on the CSF given in the following text gave uniformly negative results: direct microscopy with Gram, Ziehl–Neelsen, and India ink staining; RT PCR assays for the DNA of HSV-1, HSV-2, CMV, VZV, EBV, and Mycobacterium tuberculosis; RT PCR for SARS-CoV-2-RNA; cryptococcal antigen; and bacterial and fungal cultures. In addition, the results of the serologic screening were as follows: HSV-1/2 IgM: negative; HSV-1 IgG: positive; HSV-2 IgG: negative; VZV-IgM: negative; VZV-IgG: positive (3.059 mUI/mL); SARS-CoV-2 IgG (Liaison Diasorin SARS-CoV-2 S1/S2 IgG): positive (30,1 UA/mL); HIV-1/2 Ag/Ab: negative.

Nasopharyngeal swabs for the detection of SARS-CoV-2 RNA by RT PCR were repeated on August 8, 9, and 10 always with negative results. On the third day of hospitalization (August 11), the patient deteriorated neurologically, showing a Glasgow Coma Scale of seven (O3M3V1). She was thus intubated and transferred to the intensive care unit of our hospital. A bronchoalveolar aspirate obtained during orotracheal intubation was sent for SARS-CoV-2 RNA RT PCR and returned a negative result. This finding, together with the absence of the virus in four consecutive nasopharyngeal swabs and the SARS CoV-2 IgG positivity, is suggestive of COVID-19 in the convalescent phase. An electroencephalogram (EEG) demonstrated generalized slowing with diffuse irregular delta activity with arrhythmic waves and epileptic activity. A second lumbar puncture was judged unfeasible, due to worsening thrombocytopenia (47,000/μL). Therefore, we requested West Nile virus (WNV) serology and PCR on blood and urine. Both IgM and IgG anti-WNV (WNV IgM and IgG Capture DxSelect, Focus Diagnostics, Cypress, CA) turned negative, whereas, notably, PCR (WNV ELITe MGB kit REV.01, ELITech Group, Turin, Italy) was positive in both the patient’s blood and urine. A neurological reevaluation showed a picture of flaccid paralysis involving the four limbs with bilateral pyramidal signs. Based on the clinical picture and the results of the virological assays, the diagnosis of WNV meningoencephalomyelitis was finally made on August 13. Despite supportive therapy, the patient died 6 days later while in the ICU.

This case of WNV neuroinvasive disease observed in a patient with long-standing SLE and an initial diagnosis of SARS-CoV-2 infection was challenging for several reasons.

First, neurological complications of SARS-CoV-2 infection have been increasingly reported, with a prevalence ranging from 4.3% to 73% depending on which symptoms are considered.6–8 Meningitis, encephalitis, myelitis, acute disseminated encephalomyelitis, the Guillan–Barré syndrome, and other acute neuropathies have been described as the consequence of the neurotropism of SARS-CoV-2 or secondary to the prominent inflammatory or immune-mediated manifestations of COVID-19.8 A retrospective study conducted in France showed that COVID-19–associated encephalopathy and encephalitis occurred in, respectively, 30.2% and 9.5% of patients with neurologic manifestations.7 The median time of appearance of both conditions was 6 and 7 days after the first COVID-19 symptoms.7 In hindsight, our patient could have been considered as being in the convalescent phase of COVID-19 as evidenced by the high Ct value of SARS-CoV-2 RNA on the first nasopharyngeal swab obtained at presentation to the ED of the other hospital, the negative results of serial follow-up nasopharyngeal swabs tested in the days following her admission to our ward, the negative SARS-CoV-2 RT PCR result of the bronchoalveolar lavage obtained on intubation, as well as the weakly positive SARS-CoV-2 IgG serology.

However, when the lumbar puncture was performed, the search for SARS-CoV-2 RNA in the CSF seemed warranted, to exclude SARS-CoV-2 encephalitis. Moreover, the patient’s immunosuppressed state and the rapid clinical deterioration prompted concern about central nervous system opportunistic infections, as well as the possible onset of neuropsychiatric lupus.9,10 Because of the limited amount of CSF available, we initially searched for herpes viruses, Cryptococcus, and bacterial and mycobacterial agents, but omitted the search for WNV. Indeed, WNV was considered a less likely diagnosis because as of August 6, according to the Italian epidemiological surveillance system, no human cases of WNV or Usutu virus had yet been reported in Italy.11 Once a neuropsychiatric flare of SLE was excluded by the negative results of the tests for lupus autoantibodies and the normal concentration of complement factors in serum, as well as the main microbial etiologies turned negative, we searched for WNV infection on blood and urine. At the time of our confirmed diagnosis of WNV encephalitis according to both the European and U.S. CDC criteria,11,12 the Italian epidemiological weekly bulletin had reported only two WNV human infections in blood donors (one each in the regions of Emilia-Romagna and Piedmont).13 Although a diagnosis of WNV encephalitis should always be kept in mind, in our patient, the initial diagnosis of COVID-19 was misleading and, because of the imposed measures of strict hospital isolation for such patients, it may have contributed to a delayed diagnosis. Interestingly, a reduction of WNV infections in Italy has been attributed to a possible secondary effect of the COVID-19 pandemic due to reduced outdoor activities, although an underdiagnosis cannot be excluded.14 Indeed, we may speculate that if the diagnosis of WNV had not been made, our patient’s death would have been categorized as due to SARS-CoV-2. In conclusion, we have described herein the first case of WNV meningoencephalitis in a patient with COVID-19 in the convalescent phase, highlighting the need to always maintain a high index of suspicion for other infections even during a pandemic.