Age–gender distribution of confirmed cases of COVID-19 in sub-Saharan Africa by status (imported cases, cases due to local transmission, and cases with status unavailable). Only cases with both age and gender data are reflected.

Distribution of time between arrival in country and reporting of case confirmation status.

(A) Cumulative numbers of imported cases for which status (importation vs. local) is known, by week; (B) overall percentage of cases (with known status) that are importations; and panel (C), number of cases for which status could not be determined from available data. Mauritius and Seychelles are marked by a triangle and square, respectively, given the scale of the maps. Note: In the fourth time period, importation ratios in (B) calculated from the line list were adjusted to reflect aggregate information in three countries for which it was available (South Africa, Senegal, and Mauritius).

Travel history of imported cases by country of residence and continent of travel, for cases with documented travel history. Multiple entries are shown for confirmed cases with a reported travel itinerary that included two or more continents. 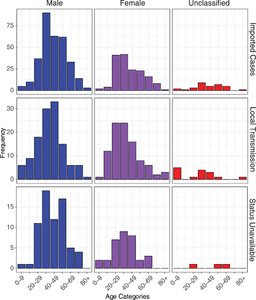 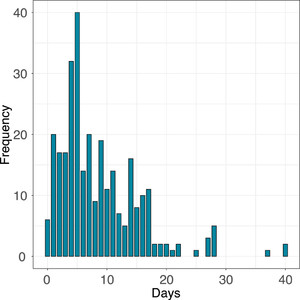 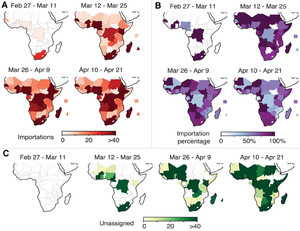 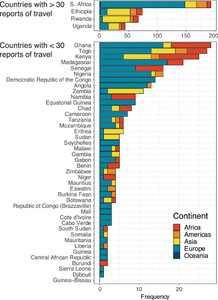 Seeding COVID-19 across Sub-Saharan Africa: An Analysis of Reported Importation Events across 49 Countries

The first case of COVID-19 in sub-Saharan Africa (SSA) was reported by Nigeria on February 27, 2020. Whereas case counts in the entire region remain considerably less than those being reported by individual countries in Europe, Asia, and the Americas, variation in preparedness and response capacity as well as in data availability has raised concerns about undetected transmission events in the SSA region. To capture epidemiological details related to early transmission events into and within countries, a line list was developed from publicly available data on institutional websites, situation reports, press releases, and social media accounts. The availability of indicators—gender, age, travel history, date of arrival in country, reporting date of confirmation, and how detected—for each imported case was assessed. We evaluated the relationship between the time to first reported importation and the Global Health Security Index (GHSI) overall score; 13,201 confirmed cases of COVID-19 were reported by 48 countries in SSA during the 54 days following the first known introduction to the region. Of the 2,516 cases for which travel history information was publicly available, 1,129 (44.9%) were considered importation events. Imported cases tended to be male (65.0%), with a median age of 41.0 years (range: 6 weeks–88 years; IQR: 31–54 years). A country’s time to report its first importation was not related to the GHSI overall score, after controlling for air traffic. Countries in SSA generally reported with less publicly available detail over time and tended to have greater information on imported than local cases.