Related-samples Friedman’s two-way analysis of variance by ranks for total misconception in each category. 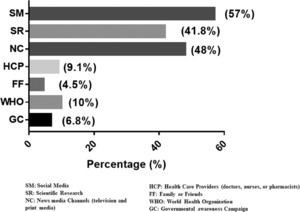 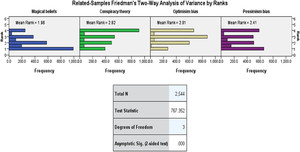 The outbreak of the novel SARS-CoV-2 virus has an enormous impact on health. People’s views about the virus impact public health efforts to mitigate the pandemic. In this study, we measured misconceptions toward coronavirus in the Jordanian population; 2,544 participants from the Jordanian population completed an online survey. Questions in the survey addressed misconceptions divided into four categories: optimism bias, pessimism bias, magical beliefs, and conspiracy theory beliefs. Questions were evaluated on a Likert scale, and average/median scores for each category were evaluated (“one” high misconception to “five” low misconception). Overall, the most common misconceptions involved conspiracy theory beliefs (2.68 ± 0.83), whereas the least common involved magical beliefs (2.25 ± 0.75). Females had more misconceptions than males (2.52 versus 2.47, P = 0.04). Participants who had attended a lecture on coronavirus, had a higher level of education, worked in a medical field, lived in urban area, or resided in Amman or northern Jordan had fewer misconceptions about SARS-CoV-2/COVID-19 (2.64, 2.34, 2.33, 2.50 and 2.50 versus 2.53, 2.73, 2.72, 2.64, and 2.66, respectively, P < 0.001). The use of social media appeared to be an important factor influencing the likelihood of false beliefs (2.61 versus 2.38, P < 0.001). Understanding of the factors influencing public perceptions surrounding the SARS-CoV-2/COVID-19 pandemic will help public health authorities improve public understanding and compliance with public health recommendations directed at combatting the virus, including the use of surgical masks, thorough handwashing, and avoiding close contact. These messages will be better received by the public through correcting misconceptions surrounding COVID-19.