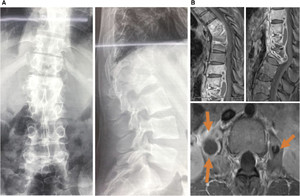 A 23-year-old young woman who was previously healthy presented to our medicine outpatient department with a 1-year history of lower back pain that now inhibited her activities of daily living. She lives in a village near a river bordering Southern Angola with her mother and sister where she was referred to our center by the local clinic. She has no other systemic complaints. The pain was described as a persistent dull aching pain that does not radiate but is associated with a growing mass or deformity in the lumbar region, as well as weakness in her lower limbs. She had no history of trauma and no familial history of malignancy. She reported unintentional weight loss, night sweats, and loss of appetite over the last 6 months. She denied any history of cough. She had no urinary or bowel incontinence.

On examination, she appeared healthy and was not in distress. Her lower back and sacrum were tender to light palpation. Her gait was normal. There was small structural kyphosis apparent in her lumbar region (gibbus deformity). Neurological examination was unremarkable, except for mild lower extremity weakness. Her rectal sphincter tone was normal. A HIV test was not reactive. Complete blood count, differential renal function, and electrolytes were all within normal range. Sputum was negative for tuberculosis (TB) by a cartridge-based nucleic acid amplification test. Her erythrocyte sedimentation rate was 130 (normal range 29) mm/hour. Her chest radiograph showed no evidence of pulmonary TB. Her spine radiograph and magnetic resonance imaging (MRI) of the spine are shown in Figure 1. Biopsy of the lesion was not possible due to lack of local resources.

In light of her history, symptoms, and radiographic images, she was started on standard TB therapy, despite the lack of biopsy and proven TB. She was discharged home to be followed up in the spine clinic after 2 months.

Tuberculosis usually infects the lungs; however, in a significant minority (10–15%), there is extrapulmonary manifestation. Extrapulmonary manifestation is usually associated with HIV infection in our region. Spinal involvement occurs in 1–2% of all patients with TB. Our region has a very high burden of both HIV and TB; this is a reason for patients presenting with back pain. A negative chest radiograph or sputum test is not sufficient to rule out the diagnosis extrapulmonary TB with spinal involvement.1 If the lesion is large, the treatment procedure consists of prolonged treatment with standard TB medications before and after debridement of the site, followed by stabilization and reconstruction surgeries if necessary.2 Unfortunately, the availability of both MRI and spinal surgeons in this region is very limited, and many of these patients are not able to receive treatment even if disease is advanced. Untreated, spinal TB can lead to compression of neural structures and debilitating deformity.3 Recognition of the incidence and findings in developing countries is key to detect cases early enough to be treated and medically managed and to avoid serious complications.