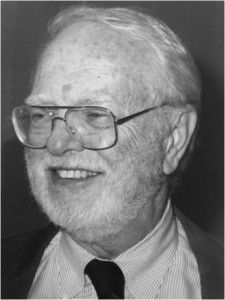 McWilson Warren, a long-standing member of the ASTMH, passed away in January of this year at the age of 91 years. Mac, as he was affectionately known, was born on a small tobacco farm outside Clinton, NC, where he grew up and attended local schools. He earned both his bachelor and master’s degrees at the University of North Carolina. An undergraduate course in parasitology sparked what was to be a most exciting and extraordinary career. Mac earned his master’s under the guidance of John Larsh, becoming intrigued with malaria and the biological complexity of parasites. Larsh steered Mac to Martin Young’s NIH laboratory in Columbia, SC, where he learned to rear and dissect mosquitoes, and prepare blood films on patients undergoing malaria therapy for neurosyphilis. After 2 years in Young’s laboratory, Mac enrolled in the PhD program at Rice University in 1954 under the guidance of Asa Chandler, where he worked on dwarf tapeworm biology. Mac then took a position in the Preventive Medicine Program at the University of Oklahoma School of Medicine from 1957 to 1961 where, among other things, he worked on hospital acquired Staphylococcus infections.

During his tenure in Oklahoma, Mac enrolled in a Rockefeller-funded program at Tulane for a 2-month tour of Central American countries to learn more about tropical diseases. During this trip, Mac realized an intense desire to work overseas full time. Happily, Robert (Bob) Coatney at the NIH recruited Mac to join a team in Malaysia that was studying primate malaria. This checked both of Mac’s boxes – going overseas and returning to the study of malaria. In concert with Don Eyles, but also working side by side with eminent malariologists such as Arthur Sandosham, Harry Wharton, and Pete Contacos in addition to Martin Young and Bob Coatney, lasting scientific contributions were made. Frequent visitors to Malaysia included other malaria luminaries such as P. C. C. Garnham, Leonard Bruce Chwatt, Bill Bray, and Robert Desowitz. The purpose of the undertaking, in a nutshell, was to determine what primate malarias existed, to what extent they could infect humans, and whether the anopheline vectors of these primate species would feed on and transmit infection to humans—in other words, what impact would primate malaria have on the success of the malaria eradication program being undertaken at that time. This story is wonderfully captured in the book The Primate Malarias (Coatney, Collins, Warren, Contacos 1971), where the species of primate malaria are described and illustrated, their vectors elucidated, and their biology detailed, including how readily they infected various other primates, including humans. The information generated in those studies from 1961 to 1965 has served malaria research well in vaccine development, chemotherapy studies, and understanding and appreciation of the rise in human cases of Plasmodium knowlesi in Southeast Asia recently documented in this and other journals.

After leaving Malaysia, Mac returned briefly to the NIH from 1965 to 1967, where he was contacted by P. C. C. Garnham at the London School of Hygiene and Tropical Medicine about doing a postdoctorate year in his laboratory working on, among other things, irradiated sporozoites. Following his time in London, Mac spent several years at the NIH, but with his continued interest in overseas assignments, in 1970, he was transferred to the CDC and sent to help establish the new field station in El Salvador. It was here that he met Mary Keany, whom he married in 1975. During their time in Salvador, they had one son, James. Following Mac’s tenure in El Salvador and on his return to Atlanta, Mac did malaria work in Haiti, Pakistan, and then back to Malaysia from 1981 to 1984 on secondment to the WHO to train the trainers for the malaria control program that encompassed the entire Pacific region. Mac finally returned to the CDC and Atlanta in 1985 to finish out his 32-year U.S. Public Health Service career.

Shortly before retiring from the CDC, Mac became Editor-in-Chief of the AJTMH in 1991, a position he continued for 7 years. It was at the Journal that Mac was able to blend his vast experience working in the tropics, engaging with networks of colleagues and collaborators, and pursuing scientific discovery. When Mac took over as Editor, the Society and Journal were both on the verge of major changes. Mac navigated the transition from paper submissions to a totally electronic process, including a format change from 7 × 10 to the contemporary 8.5 × 11, but throughout, he kept a laser attention to keeping the Journal scientifically focused and publishing the highest quality articles. Ultimately, the Society and Journal came out much stronger, with a major increase in membership as well as readership of the Journal, becoming an internationally recognized top-tier medical journal. Mac kept a keen focus on scientific quality and integrity, and widening manuscript submission to a broader range of topics. He was always attentive and supportive of the efforts of young scientists to publish, including selfless assistance to scientists for whom English was not their first language. Another personal interest of Mac’s was snakebite, and he was always excited to get another manuscript dealing with some aspect of this topic. This was probably stimulated in great measure by his many years spent in the tropics and firsthand experience with victims, and recognition of the terrible toll of this underappreciated, underreported problem on rural populations. Mac found his time as Editor to be both stimulating and enormously rewarding.

Mac also made other profound contributions to the Society, both scientific and programmatic, including serving as the first ASTMH Scientific Program chair from 1978 to 1980. His intellect, scientific curiosity, appreciation of biological complexities, and love of the tropics served him well throughout his distinguished career. In particular, Mac took it upon himself to encourage and support promising young scientists, particularly those at the CDC.

During their years in Atlanta, the Warrens’ home was a unique gathering spot for colleagues and visitors, and their hospitality was widely appreciated. The warmth of his home and wealth of editorial experience was opened to Jim Kazura, the newly named Editor, when he succeeded him in 1997–1998. In 2000, the Warrens moved to rural New Hampshire, where they owned a home that had been in Mary’s family. Mac enjoyed retirement, and the two of them were actively involved in the town of Grafton. Mac’s enthusiasm, intellectual endeavors, and physical activity continued. He relished long country walks, including in wintertime, always with an eye toward the study of local flora and fauna. Mac was preceded in death by his wife Mary, and is survived by son James. His infectious passion for tropical medicine research and immense contributions to the ASTMH will be greatly missed.