Pictures of the Supertowel being used as part of the laboratory experiments.

Round 2 experiment results showing the mean log reduction factor of Escherichia coli after volunteers washed their hands with either the Supertowel under different treatments or control procedures. *The Supertowel used when dry for 60 seconds was more efficient that handwashing with soap for 30 seconds. 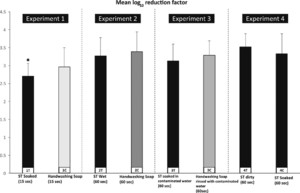 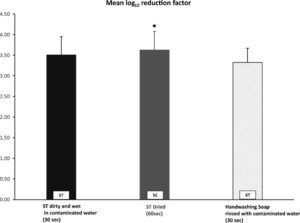 Evaluating the Efficacy of the Supertowel™ as a Handwashing Product: A Simulation of Real-World Use Conditions

The Supertowel is a fabric treated with a permanent antimicrobial bonding and has been designed as a soap alternative in emergency situations. The Supertowel has been shown to be as efficacious as handwashing with soap and water when tested under controlled laboratory conditions. It has also been shown to be a practical, acceptable, and desirable product among crisis-affected populations. The aim of this study was to test whether the Supertowel remains as efficacious when used under conditions which mimic real-world hand cleaning in challenging settings. Two rounds of laboratory tests, with 16 volunteers in each, were conducted to test the efficacy of the Supertowel when used for a shorter duration, when less wet, when used with contaminated water, when visibly dirty, and when dry. Volunteers pre-contaminated their hands with nonpathogenic Escherichia coli. Comparisons were made between hand cleaning with the Supertowel and the reference condition (normally handwashing with soap), using a crossover design. The Supertowel was marginally less efficacious than handwashing with soap when used for 15 seconds (P = 0.04) but as efficacious at 30 and 60 seconds durations. All the other Supertowel conditions were as efficient as their reference comparisons meaning that the Supertowel can effectively remove pathogens from hands when it is wet, damp, or completely dry, when it is used with contaminated water, when visibly dirty with mud and/or oil.