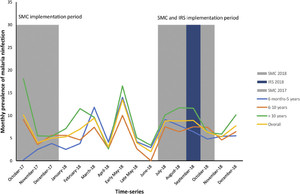 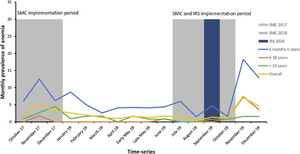 Many African countries have reported declines in malaria incidence, attributed to the implementation of control strategies. In Mali, artemisinin-based combination therapy (ACT) was introduced in 2004, and long-lasting insecticide-treated nets (LLINs) have been partially distributed free of charge since 2007. In the Malian town of Bandiagara, a study conducted from 2009 to 2013 showed a stable incidence of malaria compared with 1999, despite the implementation of ACTs and LLINs. Since 2016, seasonal malaria chemoprevention has been scaled up across the country. In addition to these strategies, the population of Bandiagara benefited from indoor residual spray implementation in 2017 and 2018 and continued universal bed net coverage. This study aimed to measure the incidence of malaria in Bandiagara, given this recent scaling up of control strategies. A cohort of 300 children aged 6 months to 15 years was followed up from October 2017 to December 2018. We performed monthly cross-sectional surveys to measure anemia and the prevalence of malaria infection by microscopy. The overall incidence of symptomatic malaria was 0.5 episodes/person-year. Malaria incidence in children up to 5 years old significantly declined since 2012 and since 1999 (incidence rate ratio estimates: 6.7 [95% CI: 4.2–11.4] and 13.5 [95% CI: 8.4–22.7]), respectively. The average prevalence of malaria parasitemia was 6.7%. Malaria incidence was higher in children older than 5 years than in those younger than 5 years, highlighting the need to extend malaria control efforts to these older children.