Age (year) and gender distribution of cholera cases among refugees in Uganda, 2016–2019.

Cases of cholera among refugee and Ugandan residents in Hoima during outbreak in 2018. 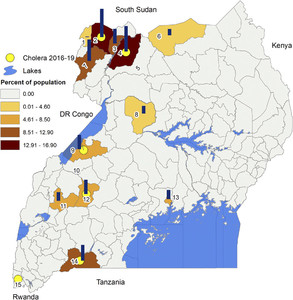 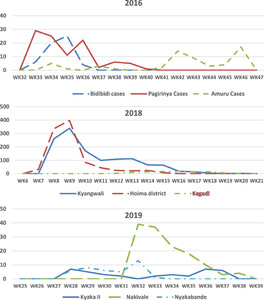 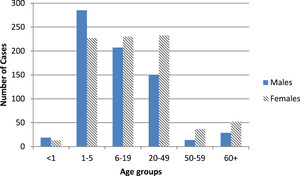 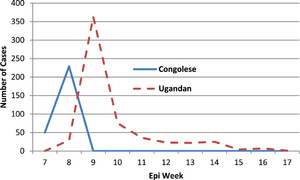 During 2016 to 2019, cholera outbreaks were reported commonly to the Ministry of Health from refugee settlements. To further understand the risks cholera posed to refugees, a review of surveillance data on cholera in Uganda for the period 2016–2019 was carried out. During this 4-year period, there were seven such outbreaks with 1,495 cases and 30 deaths in five refugee settlements and one refugee reception center. Most deaths occurred early in the outbreak, often in the settlements or before arrival at a treatment center rather than after arrival at a treatment center. During the different years, these outbreaks occurred during different times of the year but simultaneously in settlements that were geographically separated and affected all ages and genders. Some outbreaks spread to the local populations within Uganda. Cholera control prevention measures are currently being implemented; however, additional measures are needed to reduce the risk of cholera among refugees including oral cholera vaccination and a water, sanitation and hygiene package during the refugee registration process. A standardized protocol is needed to quickly conduct case–control studies to generate information to guide future cholera outbreak prevention in refugees and the host population.