Case of Dermatobia hominis infestation. (A) Furuncle with visible respiratory spiracles. (B) The larva’s body and posterior end are visible after occlusion of the lesion with soap paste. (C) Extracted L3 larvae with characteristic cylindrical body and narrowed posterior end. (D and E): Backward-facing cuticular spines and mandibles are visible on microscopic examination. . 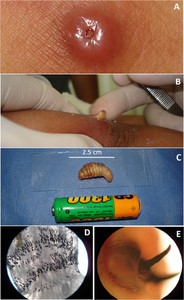 Human Botfly Infestation in an Amerindian Girl in Southern Venezuela

A 9-year-old Pemon girl visited the primary healthcare outpatient clinic at Wonken, a Pemon village in the Gran Sabana region of Bolivar state, in southeastern Venezuela. Wonken is located within the Canaima National Park, a tropical rainforest region at 844 m above sea level. The average temperature is 20°C.

The patient presented a 4-week history of discomfort, itching, redness, and secretion in the back of her left thigh. She reported feeling movement inside the lesion, described as a “screwdriver being turned.” Despite living in the village, she indicated recent visits to Araparitá, a remote community south of Wonken.

She was afebrile and with stable vital signs. She presented a non-painful furuncle at the back of her left thigh, surrounded by an erythematous area of approximately 10 cm (Figure 1A). On close examination, a pair of moving respiratory spiracles were visible within the center of the lesion (Supplemental Video).

Suspecting a case of furuncular myiasis, a soap paste was applied on the lesion and covered in gauze to asphyxiate the fly larvae. After 3 hours, the gauze was removed, and the posterior end of the larva was clearly visible. A single live larva was successfully extracted (Figure 1B) and subsequently identified as a third instar stage larva (L3) of Dermatobia hominis, the human botfly.

The gross morphological characteristics that allowed for identification of the extracted larva included the cylindrical body shape with narrowed posterior end, and the backward-facing, coarse cuticular spines present on all but the posterior three body segments (Figures 1C and D). The anterior mandibles (Figure 1E) were also clearly visible. Even though posterior spiracles were not examined (straight spiracular slits in a deep cavity are characteristic of this species), the gross morphologic appearance in the setting of furuncular myiasis in Venezuela is diagnostic of D. hominis infestation.1

Editor's Note: These images were previously published in Dermatologia Venezolana