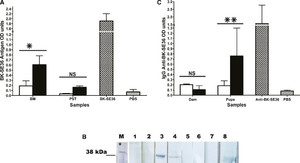 Intranasal instillation of SE36, a malaria vaccine candidate antigen, in lactating BALB/c strain (derived from the Bagg and albino laboratory inbred mice) female mice resulted in the appearance of the antigen in breast milk as demonstrated by sandwich ELISA and Western blot. Pups born of immunologically naive mice and breastfed on lactating foster mothers exposed intranasally to SE36 developed IgG anti-SE36 antibodies. These data demonstrate that maternal immunization in mice by this route in lactating mothers can result in active immunization of offspring via ingestion of breast milk containing antigen. If confirmed in a nonhuman primate model and in human subjects, this strategy might be transformative for vaccination against malaria and other infant killer infectious diseases.

African infants < 6 months have substantial malaria burdens, with prevalence varying between 0% and 36.1% and mortality based on verbal autopsy ranges between 20% and 46.2%. 1–3 The mainstay of malaria control is chemotherapy, but all antimalarial drugs are off-label with unknown dosing, safety, or efficacy for this age-group. 1 Although these gaps might be addressed by increasing the number of clinical trials of antimalarial drugs in very young infants, the emergence of drug-resistant malaria parasites still threatens to undermine chemotherapy. 4 Another successful malaria control measure is the reduction of mosquito vector/human contact by indoor residual spraying with WHO-approved insecticides and sleeping under long-lasting insecticide-treated bed nets. However, malaria vector control is also constrained by insecticide resistance. 5

Malaria vaccines offer a beacon of hope for African infants. RTS,S/AS01 (Mosquirix™; GSK, Brentford, United Kingdom) is the only malaria vaccine candidate that has passed Phase III clinical trials and is under pilot implementation in Africa. 6,7 The poor performance of RTS,S in infants aged 6–12 weeks has highlighted some critical determinants of the outcome of immunization in young infants. 6 These include the immaturity of the infant immune system, polarization of infant immune responses, maternal antibodies and immune complexes in breast milk at the time of vaccination, and lack of infant-optimized adjuvants. 8–11 There is therefore a need to explore other infant immunization strategies.

Maternal immunization to confer active immunity to breastfed infants through ingestion of breast milk containing vaccine antigens is an innovative vaccination concept. 12 This concept is supported by a recent report of Plasmodium falciparum blood stage antigens in human breast milk. 13 In this report, we present preliminary evidence that intranasal administration of recombinant SE36 antigen to lactating mice results in the appearance of the antigen in breast milk and that pups borne of immunologically naïve mice not exposed to SE36 develop IgG anti-SE36 antibodies following breastfeeding by SE36-exposed foster mothers. SE36 is a promising malaria vaccine candidate derived from P. falciparum serine rich antigen 5. It has demonstrated excellent immunogenicity and safety profiles in phase Ib clinical trials in African children in Burkina Faso and Uganda. 14,15

Six-week-old nonimmune lactating BALB/c strain (derived from the Bagg and albino laboratory inbred mice) female mice received a 30 µL mixture of SE36 (42 µg) or phosphate buffered saline (PBS) (N = 10 per group) plus mouse monoclonal IgG1 anti-TGF-β (Sigma Aldrich catalogue no. T0438, clone 9,016.2) in each nare every other day over 21 days. The rationale of administering neutralizing anti-TGF-β antibody was to reduce maternal levels of TGF-β to prevent TGF-β–dependent development of antigen-specific oral tolerance in pups. 16 Milk samples were obtained 4–6 hours after each intranasal administration. In brief, lactating mice were separated from their pups for an hour before milking, and 5 minutes before milking, the mice were injected intraperitoneally with oxytocin (0.5 international units; Sigma Aldrich catalogue no. O4375) to stimulate milk let down. 17 Individual mice were restrained and milk manually expressed and collected as described. 17,18 The milk was stored at −70°C until further analysis.

The presence of SE36 in breast milk was demonstrated by sandwich ELISA and Western blot analysis. For ELISA, a mouse polyclonal antiserum against SE36 was used as a source of capture and reporter antibodies. Flat-bottomed 96-well microtiter plates were coated overnight with the polyclonal mouse serum diluted 1: 50 in coating buffer of 0.5 M carbonate bicarbonate buffer pH 9.6. The plates were washed with PBS containing 0.1% Tween 20 (PBS/Tween) and nonspecific binding sites blocked by incubation for 2 hours with 5% bovine serum albumin (BSA) in PBS/Tween. After washing off excess BSA, de-lipidated breast milk samples diluted 2-fold in PBS-Tween, SE36 (as positive control), and PBS (as negative control) were added to designated wells and incubated for further 3 hours. The plates were washed with PBS/Tween, and the polyclonal mouse serum diluted 1:1,000 was added and the plates incubated for 2 hours. The reaction was developed by successive incubations with a goat anti-mouse IgG-alkaline phosphatase conjugate and ρ-nitrophenylphosphate substrate; optical densities (ODs) for SE36 antigen were measured at 405 nm on a spectrophotometric ELISA reader. To demonstrate the presence of SE36 in pup stomachs, an extract of pooled stomach contents of breastfed pups was analyzed alongside breast milk samples in the sandwich ELISA. For Western blots, pooled de-lipidated milk samples from SE36 or PBS-sham–treated lactating dams and SE36 (positive control) were boiled with Laemmli sample buffer and resolved by discontinuous sodium dodecyl sulfate polyacrylamide gel electrophoresis. The resolved proteins were electrophoretically transferred to the nitrocellulose membrane which was blocked with 2% BSA and incubated successively with polyclonal mouse anti-SE36 diluted 1:1,000, a secondary horseradish peroxidase–conjugated goat anti-mouse IgG diluted 1:1,000, and 4-chloro-1-naphthol substrate. SE36 was detectable in breast milk after intranasal antigen administration and in pup stomachs after breastfeeding (Figure 1A). SE36 recovery from pup stomachs was low, which probably reflected the effect of gastric digestion, but the antigen OD in stomach contents of pups breastfed by antigen-exposed mothers was 4-fold higher than background. Western blot analysis demonstrated an antigen of about M r 38,000 in breast milk which co-migrated with a band of similar M r in the SE36 antigen–positive control lane. This band was observed only in breast milk of mice which received SE36 but not PBS.

Free antigen in the presence of TGF-β in breast milk induces oral tolerance in mice. 16 However, the effect of TGF-β can be neutralized by the coadministration of anti-TGF-β, which prevents the development of oral tolerance. 16 In our experiments, mice pups breastfed on dams that received anti-TGF-β and SE36 developed specific antibodies. Our observations confirm a previous report that an allergen presented to lactating mice through an aerosol chamber not only appears in breast milk but also sensitizes breastfed pups born of nonexposed mothers. 16

This study has several limitations. First, during the immunization of mice dams with SE36, there was no specificity control consisting of an irrelevant P. falciparum antigen expressed in the same vector as SE36. The possibility of antibody cross-reactivity in pup sera cannot therefore be ruled out. Second, we reported on only IgG antibody ODs in pup sera but did not confirm the functional activity of the antibodies by in vitro growth inhibitory assays. Finally, the effect of immunizing malaria-exposed mice dams was not investigated. This would have been more representative of malaria-experienced mothers in malaria-endemic countries.

In conclusion, we demonstrate for the first time that maternal immunization and breastfeeding is a feasible strategy for inducing antigen-specific antibodies in breastfed mice pups and that oral tolerance can be overcome. Current maternal immunization practices are designed to protect infants by passive transfer of the mother’s immunity. 20 Our research demonstrates that maternal immunization strategies can be reengineered to stimulate the development of the infant’s own antibody responses by optimizing antigen transfer to breast milk and circumventing oral tolerance. Malaria blood-stage antigens have been demonstrated in human breast milk, but the mechanism of antigen transport remains unknown. 13 The public health significance of malaria antigen shedding in breast milk remains to be investigated in prospective studies of mother–infant pairs. Vaccination against killer diseases by infants nursing on lactating mothers shedding vaccines in milk would be transformative for infant vaccinology if validated and would boost breastfeeding promotions.