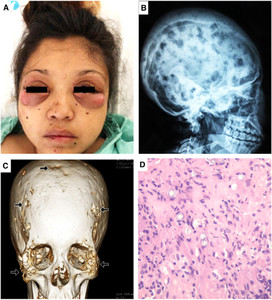 Coccidioidomycosis is a systemic fungal disease caused by Coccidioides immitis and Coccidioides posadasii. The lungs are the most common and often the initial site of involvement, and the non-pulmonary presentation is infrequent. We describe an unusual case of primary craniocutaneous coccidioidomycosis in a pregnant woman with infected bilateral periorbital nodules, intense pain at paranasal sinuses, and several osteolytic skull lesions. The analysis of 54 cases available in the literature makes us suggest that the area between the United States and Mexico is a risk zone for primary cutaneous coccidioidomycosis.

Coccidioidomycosis, also named San Joaquin fever or Valley fever, is a systemic fungal infection caused by inhalation of spores of Coccidioides immitis and Coccidioides posadasii. After pulmonary affliction, the skin is the second most common affected site. 1 It affects adult persons with a higher incidence in individuals aged > 40 years who are exposed to dust in endemic areas, mainly in the south of the United States and the north of Mexico. 2 Other risk factors have also been described, such as immunosuppressive diseases (i.e., HIV), cancer, autoimmune pathologies, diabetes and its subsequent treatments, and pregnancy (especially during later stages). 1

A 24-year-old Mexican woman with two abortions, without drug addictions, and denied having lived with tuberculosis patients was included. She lived from May to October 2018 in Ensenada, Baja California, in Northwest Mexico, where she worked as a field-worker. At the beginning of August 2018, she noticed painless soft cranial masses accompanied with a constant and exacerbated to intense holocraneal headache without aura, for which nonsteroidal anti-inflammatory drugs (NSAIDs) were administered. Three months later, fever and night sweats were added, and the headache became unresponsive to NSAIDs, the reason for which it was necessary to look for medical services several times.

In January 2019, with 35 weeks of pregnancy, at Hospital General de Los Mochis, Ahome, Sinaloa, Mexico, other signs and symptoms were observed, such as diplopia, ocular proptosis, bilateral palpebral ecchymosis, and bilateral periorbital nodules with pain at paranasal sinuses (Figure 1A). The X-ray showed several osteolytic skull lesions and an increase in diploe thickness (Figure 1B), whereas a computed tomography (CT) scan confirmed irregular massive lytic lesion of the skull with destruction of the posterior wall of the bilateral maxillary sinus (Figure 1C) and sphenoid sinus, regular and rounded hyperdense lesions of the bilateral maxillary floor, and retro-orbital and ethmoidal sinusitis. Multiple myeloma and then polyostotic fibrous dysplasia diagnosis were suspected but were later discarded with bone marrow biopsy, serum protein electrophoresis and lack of renal disease, and no detection of lytic bone lesions in other body areas, through X-ray studies, respectively.

On February 14, 2019, fetal lung maturation was decided, and cesarean section was successfully induced.

On admission at Hospital General de Culiacan, Culiacan, Sinaloa, Mexico, on February 20, she was explored. Her higher mental functions were preserved, pharynx and neck, mammary gland, abdomen, and cardiopulmonary evaluation without pathological alterations. No nystagmus was evident, and the pupils were isocoric and normoreactive to light, but exotropia was observed. The skull presented both palpable and painless soft-tissue masses predominantly in frontal, parietal, and occipital bones (approximately 1 cm in diameter) that followed Blaschko’s lines. Also, bilateral eyelid ecchymosis, proptosis, hypertelorism, bilateral periorbital edema with abscessed lesions (approximately 2 cm in diameter), and intense pain on paranasal sinuses were observed.

The patient was examined by ophthalmology service for ocular pain, binocular diplopia, and epiphora. For this reason, treatment with ophthalmic tobramycin was added. Also, warm compresses in eye area were recommended. To discard a paranasal sinuses infection, a cranial CT scan was performed. Otolaryngology evaluation reported irregular massive lytic lesion of skull with destruction of the posterior wall of the bilateral maxillary sinus and sphenoid sinus, regular and rounded hyperdense lesions of the bilateral maxillary floor, and retro-orbital and ethmoidal sinusitis, but without involvement of the brain tissue.

A bone biopsy was required to know the cause of osteolysis. For that, a supraorbital transciliary incision in the eyelid and left frontal area was the best option, dissecting down to the bone finding abundant purulent fluid, whose bacterial culture was no possible; however, the histopathology approach showed abundant spherules suggestive of Coccidioides spp. (Figure 1D). After that, a daily regimen of 400 mg of oral fluconazole was planned for 3 years, at least, depending on the therapeutic response.

Computed tomography scan of the chest revealed a pulmonary nodule; however, lobar or segmental consolidation, multifocal consolidation, adenopathy, pleural effusions, chronic cavities, persistent pneumonia, and parenchymal disease were discarded, whereas the CT scan of the abdomen showed an enlarged liver, and no abnormalities were detected on pelvis structure CT scan.

Coccidioidomycosis is a systemic fungal disease acquired generally through inhalation of the spores of C. immitis or C. posadasii. Clinically, it manifests as pulmonary disease in most of the cases, but can also present as extrapulmonary disease, which is extremely rare, with the skin being a vulnerable site assuming a direct traumatic inoculation of the organism by an external source. 1 This clinical form is named primary cutaneous coccidioidomycosis (PCC), which, together with the cranial form, has been reported in approximately 54 patients, with 35 of them (64.8%) possessing epidemiological history (residence, occupational, or travels) to the aforementioned endemic zone, 21 (38.9%) having face/cranial clinical presentation, and 17 (31.5%) presenting both of the latter characteristics. 3–12 These data reveal that face/cranial primary cases have increased in the last years and make us suggest that the area between the United States and Mexico is an endemic risk zone for PCC, specifically at the face/skull.

Regarding our patient, she refers several months (May–October 2018) of occupational exposure at Central Valley of the U.S. state of California while pregnant. The patient does not remember getting a percutaneous wound; therefore, it is unclear how the fungus was acquired. In this respect, we believe that it was inhaled with proliferation at paranasal sinuses with posterior dissemination and damage to the skin and cranial bones; however, the hematogenous dissemination can be a possible option. Unfortunately, this uncertainty cannot be clarified.

To the best of our knowledge, two similar cases have been previously reported. Gillespie described a 13-month-old child with a subcutaneous mass at the right maxillary region just inferior and lateral to the right orbit. 11 Also, Surech reported a 40-year-old female patient with rheumatoid arthritis, who developed a soft, non-tender, cystic-like lesion at the right frontal region of the skull. 12 Both patients suffered damage to cranial bones caused by non-pulmonary coccidioidomycosis, but without skin lesions as in our patient.

Cranial coccidioidomycosis can be a very critical clinical entity if surgical resection of the cystic mass does not occur early and suppose risk of involvement of the central nervous system such as meningitis, cerebral infarcts, and arachnoiditis. 12

In our patient, 20 days of hospital stay and a great battery of clinical and laboratory studies confirm the imitator attribute of coccidioidomycosis, and might suppose an underestimation of this infection. Also, we highlight the importance of histological diagnosis and having a high index of clinical suspicion to prevent damage to other organs, which in our patient could have been the eyes, meninges, and brain. Hence, it is likely that a bad prognosis could have occurred if Coccidioides spp. has not been detected and antimycotic medication has not been implemented, which contrasts with the observations made by Chang et al., 13 who held that PCC has an excellent prognosis and only supportive treatment is required in most cases.

In summary, in our patient, the definite diagnosis of primary craniofacial coccidioidomycosis was made on the basis of histopathological approach of bone lesion seen by imagenological studies in the absence of pulmonary symptoms, hypothesizing about occupational exposure and pregnancy as the main risk factors for infection and severity, respectively.