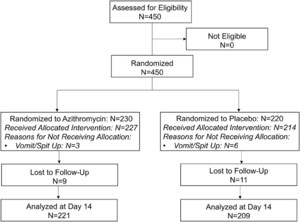 Biannual mass azithromycin distribution reduces all-cause child mortality in some settings in sub-Saharan Africa; however, adverse events and short-term infectious outcomes following treatment have not been well characterized. Children aged 0–59 months were recruited in Nouna Town, Burkina Faso, and randomized 1:1 to a single directly observed oral 20 mg/kg dose of azithromycin or placebo. At 14 days after treatment, caregivers were interviewed about adverse event symptoms their child experienced since treatment and if they had sought health care for their child. All children had tympanic temperature measured at the 14-day visit. We compared adverse events and clinic visits using logistic regression models between azithromycin- and placebo-controlled children. Of 450 children enrolled, 230 were randomized to azithromycin and 220 to placebo. On average, children were aged 28 months, and 50.9% were female. Caregivers of 20% of children reported that their child experienced at least one adverse event, with no significant difference between study arms (19.9% azithromycin; 20.0% placebo, logistic regression P = 0.96). Vomiting was more often reported by caregivers of azithromycin-treated children than by those of placebo-treated children (7.2% azithromycin, 1.9% placebo, logistic regression P = 0.01). There were no significant differences in other adverse events or clinic visits. Adverse events following a single oral dose of azithromycin in preschool children were rare and mild. Azithromycin administration appears safe in this population.