Yearly distribution of dengue serotypes between 2002 and 2018 at Kamphaeng Phet Provincial Hospital.

Yearly distribution of dengue serotypes between 2002 and 2018 at Phramongkutklao Hospital. 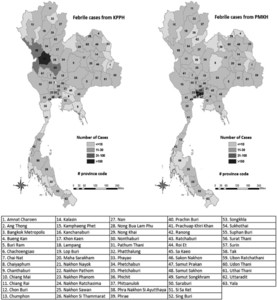 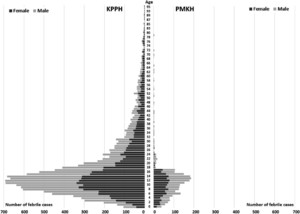 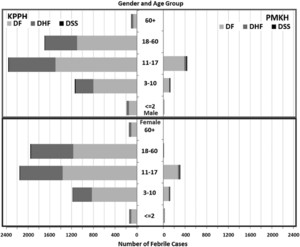 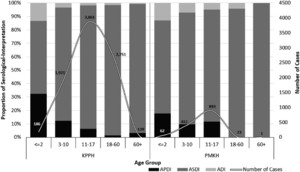 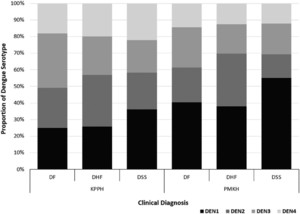 Dengue is a re-emerging global public health problem, the most common arbovirus causing human disease in the world, and a major cause of hospitalization in endemic countries causing significant economic burden. Data were analyzed from passive surveillance of hospital-attended dengue cases from 2002 to 2018 at Phramongkutklao Hospital (PMKH) located in Bangkok, Thailand, and Kamphaeng Phet Provincial Hospital (KPPH) located in the lower northern region of Thailand. At PMKH, serotype 1 proved to be the most common strain of the virus, whereas at KPPH, serotypes 1, 2, and 3 were the most common strains from 2006 to 2008, 2009 to 2012, and 2013 to 2015, respectively. The 11–17 years age-group made up the largest proportion of patients impacted by dengue illnesses during the study period at both sites. At KPPH, dengue virus (DENV)-3 was responsible for most cases of dengue fever (DF), whereas it was DENV-1 at PMKH. In cases where dengue hemorrhagic fever was the clinical diagnosis, DENV-2 was the predominant serotype at KPPH, whereas at PMKH, it was DENV-1. The overall disease prevalence remained consistent across the two study sites with DF being the predominant clinical diagnosis as the result of an acute secondary dengue infection, representing 40.7% of overall cases at KPPH and 56.8% at PMKH. The differences seen between these sites could be a result of climate change increasing the length of dengue season and shifts in migration patterns of these populations from rural to urban areas and vice versa.