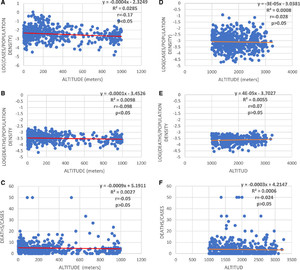 The Pathogenicity of COVID-19 Is Independent of Increasing Altitude: The Case of Colombia

The recent article “Negative Correlation between Altitude and COVID-19 Pandemic in Colombia: A Preliminary Report” published by Cano-Perez et al. 1 analyzed data from 70 municipalities in Colombia and concluded that increasing altitude was associated with fewer SARS-2 infections, lower COVID-19 mortality, and lower case fatality rate (CFR). 1 These results are consistent with studies from the beginning of the pandemic in eight provinces of Bolivia, from Ecuador, 2 and from 185 provinces in Peru. 3 This latest study concluded that CFR was unchanged with increasing altitude. 3

A recent study in 1,636 districts in Peru located between 5 and 4,705 m above sea level assessed 509,521 cases with SARS-CoV-2 infection. A negative correlation between altitude and infections with SARS-CoV-2 was observed; however, further analysis showed that the negative correlation was only observed between 5 and 1,000 m altitude. At altitudes between 1,000 and 4,700 m, there was no significant association between altitude and incidence of infection. 4 An altitude gradient for protection against SARS-CoV-2 contagion could not be demonstrated.

Regarding the publication from Colombia, 1 only 70 municipalities from a total of 1,122 were analyzed. This limited sample might produce a bias in the interpretation of the results. Therefore, information from the 1,122 municipalities in Colombia ranging in altitude from 2 to 3,259 m above sea level has been analyzed.

Analysis of correlation of the Spearman and Poisson regression analyses of cases of SARS-CoV-2, deaths due to COVID-19, and CFR in relation to altitude (m) with and without adjustment by population density from 1,122 municipalities of Colombia

CFR = case fatality rate. Data are obtained from 1,122 districts of Colombia (https://sig.sispro.gov.co/SituacionCovid/) and data of the altitudes are obtained of official Municipio page (https://www.municipio.com.co/).

According to the Pearson correlation, the only significant difference was observed for SARS-CoV-2 infections and COVID-19 deaths at altitudes < 1,000 m. However, the slope was close to zero, and biological significance is likely negligible (Figures 1A–F).

Poisson regression was performed with only altitude in the model, only population density in a second model, and including altitude and population density in a third model. With only altitude in the model, a positive association was observed between infections and deaths in both altitude groups (P < 0.05). However, the CFR showed a negative association with altitude only in the group living at between 1,000 and 3,259 m (P < 0.05).

In conclusion, data from Colombia show that there is no altitude gradient that is protective against SARS-CoV-2 infection or COVID-19 mortality.