HiFive theory of change. This figure appears in color at www.ajtmh.org. 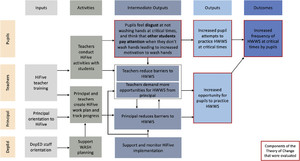 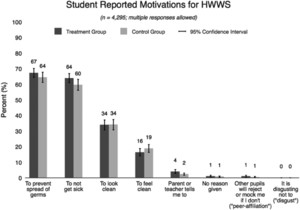 Can Social Motivators Improve Handwashing Behavior among Children? Evidence from a Cluster Randomized Trial of a School Hygiene Intervention in the Philippines

This study reports the impact of the HiFive program, a 6-week handwashing campaign that targets social and emotional motivators to improve student handwashing in primary schools in the Philippines. We designed a clustered randomized trial to evaluate the impact of HiFive on student handwashing behavior, motivation, and access. Of the sample of 196 primary schools located in two districts, half were randomly assigned to receive the program in the 2017–2018 school year. Survey and observation data were collected 3 months after the conclusion of the campaign. In control schools, only 2.5% of students were observed washing their hands with soap and water, our primary outcome and 14.8% were observed washing their hands with at least water. HiFive led to a 3.7 percentage point (p.p.) increase (P < 0.01) in the rate of handwashing with soap and water and a 5.6 p.p. increase (P = 0.03) in handwashing with at least water after toilet use. HiFive also led to a 10.8 p.p. (P < 0.01) increase in the number of handwashing facilities stocked with soap. The program had limited impact on the motivators targeted by the program, suggesting that the small improvements in handwashing may have been driven by increases in the availability of soap. More research is needed to understand how interventions can effectively trigger social motivators to improve handwashing behavior among schoolchildren, and whether the effectiveness of these programs can be augmented with “nudge”-based interventions from the behavioral sciences.