Comparison of a spectrum from Case 2 (Spectrum 3) to the modified Bruker database (MALDI Biotyper IVD database version 2.3 7712. Main spectrum profile modified with the addition of two spectra from Case 1 for a total of 11 Candida auris spectra). The spectra of Case 1 matched the first two positions (log-score values: 2.33 and 2.210) of the top 10 ranking. Our tested spectrum (or unknown spectrum) is represented in the upper part of each panel, and the reference spectrum selected from the database appears in blue in the lower part of each panel (thresholds of composite correlation index: < 0.80, red: low matching; 0.80–0.90, yellow: moderate matching; > 0.90, green: high matching). 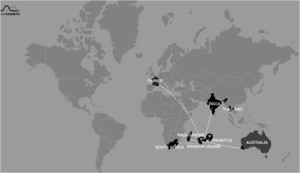 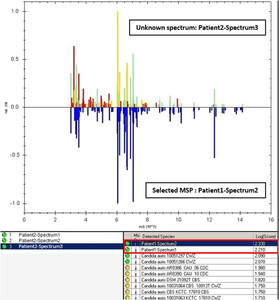 Candida auris is an emerging multidrug-resistant yeast that can cause severe infections and spread easily between hospitalized patients, leading to outbreaks in hospital. Here, we report the first four cases of colonization and invasive infection with C. auris reported in the Indian Ocean region. All cases were observed in the French overseas Reunion Island, a very popular destination for European travelers. Three patients had urinary tract or skin colonization, and one had a fatal invasive infection. In three cases, including that of the infected patient, the yeast was not initially identified as C. auris, preventing specific hygiene measures to be implemented as suggested in the December 2016 clinical alert to European healthcare facilities. The infected patient likely acquired C. auris in the intensive care unit from the first colonized patient. This is the first case of C. auris infection and the first potential case of nosocomial transmission of the pathogen to be reported in the French overseas Reunion Island.