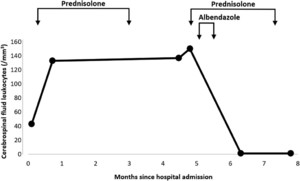 Eosinophilic meningitis is classically caused by Angiostrongylus cantonensis. Treatment usually includes supportive care and corticosteroids. Anthelminthic drugs are often avoided because of the risk of an inflammatory reaction to dying larvae. The duration of symptoms in most cases is up to a few weeks. We describe a case of eosinophilic meningitis, likely due to Angiostrongylus spp. infection, with recurrent symptoms and persistent cerebrospinal fluid eosinophilia despite corticosteroid treatment, over a period of almost 5 months. This only resolved after treatment with albendazole.

A 62-year-old Caucasian female with no medical comorbidities presented to our hospital immediately on returning to the United Kingdom after a 5-month sailing holiday. During her trip, she visited the Caribbean, Columbia, Panama, and finally French Polynesia.

On admission, she complained of a 2-week history of severe right-sided headache, associated with two transient episodes of right partial visual field loss consistent with an inferior quadrantanopia, which started in French Polynesia. These symptoms were preceded by feeling nonspecifically unwell and some mild paraesthesiae in her hands, feet, and loin, as illustrated in Figure 1. She denied any fever or respiratory symptoms. During her trip, she had travelled with her husband, and they were careful with the food and water that they consumed. Most of the food she ate was canned food or preserved supplies suitable for long sea voyages. She had no specific memory of inadvertently consuming freshwater molluscs but did remember eating a salad in Curaçao (an island in the Dutch Caribbean region) that, on reflection, may have not been washed carefully. She also remembered eating a raw seafood dish on arrival in French Polynesia that contained conch meat (a marine mollusc), and consumed cooked crab at this time too. She denied any other episodes of ingesting molluscs, crustaceans, raw fish, or raw meat. She denied any animal exposure.

Initial treatment with antibiotics to cover bacterial central nervous system infection was stopped following CSF results. The patient was then started on prednisolone 1 mg/kg daily, to treat a presumptive diagnosis of eosinophilic meningitis due to angiostrongyliasis. In addition, she was given a 12-mg dose of ivermectin to treat other parasitic causes of eosinophilia.

The patient’s symptoms initially improved after the administration of corticosteroids. The dose of prednisolone was reduced to 0.7 mg/kg prednisolone daily after 8 days. However, 3 days following this reduction, the patient complained of a worsening headache and the dose was restored to 1 mg/kg daily. Her headache rapidly improved again with this dose. Cerebrospinal fluid analysis was repeated, and cellularity had increased to 113 leukocytes/mm3 (76% polymorphs). Cerebrospinal fluid cytology again confirmed eosinophilia. Repeat MRI showed no new significant changes. Her symptoms gradually improved, and she was discharged 1 month after her original presentation with a plan to wean off corticosteroids over the next 8 weeks.

On assessment in clinic 4 weeks after completion of the corticosteroid course, she complained of a 2-week history of worsening paraesthesiae and radicular pains. Repeat blood tests were unremarkable without peripheral eosinophilia. She had two further CSF examinations, and these confirmed ongoing CSF inflammation with eosinophils, as shown in Figure 2. Clonality studies and mutation analysis were undertaken to exclude a hematological malignancy as a cause for CSF eosinophilia and were unremarkable. Angiostrongylus immunoblot was repeated and was positive on the CSF and blood, and the patient was diagnosed with eosinophilic meningitis secondary to probable angiostrongyliasis.

The patient was recommenced on prednisolone at 0.7 mg/kg, and a-14 day course of albendazole 15 mg/kg daily was started 9 days later. Her symptoms improved, and CSF subsequently normalized as demonstrated in Figure 2. A final CSF analysis was undertaken almost 8 months after her initial presentation, and this remained normal with no cells detected in the CSF. She remained well but with residual mild paraesthesiae and headaches.

Eosinophilic meningitis is an uncommon form of meningitis, and has been defined by greater than 10 eosinophils/mm3 of the CSF, or where eosinophils account for at least 10% of the total CSF leukocytes; however, it is well recognized that even one eosinophil in the CSF is abnormal.1 Angiostrongylus cantonensis, a parasitic nematode also known as the “rat lungworm,” is the leading infectious cause and is usually acquired by consuming raw or undercooked freshwater snails or slugs. Incidence is highest in Southeast Asia and the Pacific basin; however, cases have been reported in countries worldwide.2

Angiostrongylus cantonensis eosinophilic meningitis has an average incubation period of 1–3 weeks, but may range from days to several months depending on the parasite burden.3 After larvae migrate to neural tissues, patients usually present with a severe headache. Other symptoms may include fever, neck stiffness, nausea, vomiting, and paresthesia. Focal neurology is uncommon but cranial nerve palsies and muscle weakness may be present in some cases.4 Magnetic resonance imaging of the brain may be normal or show leptomeningeal enhancement or hyperintense signal lesions.5 The diagnosis is usually made on the basis of a compatible travel history, CSF eosinophilia, and serology where available.

Treatment usually includes supportive care and corticosteroids.6 The addition of an antihelminthic drug is controversial because of a theoretical risk, reinforced by case reports,7 that they could be harmful due to the inflammation initiated by an immune response to dying larvae. Humans are an accidental host for A. cantonensis, and the larvae are unable to complete their life cycle so will die with time without specific treatment.8,9 The duration of symptoms in most cases is limited to a few weeks.4,10 For this reason many clinicians avoid the use of anthelminthic drugs. Some studies have suggested that albendazole may reduce the duration of headache,11 while others have found its addition is of no significant benefit.12

Because of the limited availability of A. cantonensis PCR, the diagnosis of probable angiostrongyliasis in this case was based on a consistent clinical syndrome, coupled with seroconversion of Angiostrongylus serology. The initial negative serology may be due to the insensitivity of the test, of particular concern in non-South East Asian acquired infections, or due to delayed seroconversion which is well described; in one study only a minority of patients had positive serology at the time of presentation.13 However, in the context of this clinical presentation, we feel that the positive serology on repeat testing is significant and is consistent with Angiostrongylus infection.

There have been previous reports of patients experiencing prolonged symptoms with eosinophilic meningitis due to presumed angiostrongyliasis, in most cases when treated with corticosteroids alone.13–16 To our knowledge, this is the first published case of protracted and recurrent eosinophilic meningitis, in which albendazole therapy is felt to have been necessary to achieve cure and normalize CSF eosinophilia. We have proven, through serial CSF examinations over a period of almost 5 months, a lack of response to supportive care and corticosteroids alone. This is in contrast to current understanding of the lifespan of A. cantonensis, mainly based on data from rats. Understanding of the physiology of the parasite in humans is limited by small numbers of autopsies of infected patients.9 Assuming the diagnosis of angiostrongyliasis is correct, one possible inference from this is that A. cantonensis larvae may be able to survive for longer in the human host than previously reported. Another possibility is that there may be other Angiostrongylus species capable of causing eosinophilic meningitis in humans with a different natural history of infection.

Studies looking into treatment previously have focused on symptom duration, rather than objective markers of response, such as CSF findings.6,11,12 These studies have consistently demonstrated a clear role for corticosteroids, but the use of anthelminthic drugs remains contentious. Consistent with these studies, our patient’s symptoms improved after the initial administration of corticosteroids. However, low grade headaches and radicular pains continued and CSF eosinophilia persisted until albendazole was administered, suggesting an important role for anthelminthic treatment in the cure of this patient.

This case suggests that eosinophilic meningitis due angiostrongyliasis can cause protracted symptoms and that anthelminthic drugs may have a role in the treatment. Ideally randomized clinical trials are required to investigate this further and these should include repeat CSF analysis as an outcome measure, in addition to symptom resolution.