Map of the southwest region of Chad showing 25 villages* from four regions along the Chari River system that were visited in July 2017 for a matched case–control study of 25 case persons with patent dracunculiasis infections from 2013 to 2017 and 63 controls. *In this map, three pairs of villages are adjacent to each other and share the same GPS coordinate. 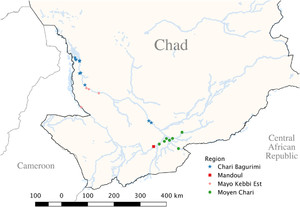 Dracunculiasis, slated for global eradication, typically is acquired by drinking stagnant water containing microscopic crustaceans (copepods) infected with Dracunculus medinensis larvae, causing clusters of case persons with worms emerging from the skin. Following a 10-year absence of reported cases, 9–26 sporadic human cases with few epidemiologic links have been reported annually in Chad since 2010; dog infections have also been reported since 2012. We conducted an investigation of human cases in Chad to identify risk factors. We conducted a case–control study using a standardized questionnaire to assess water and aquatic animal consumption, and links to dog infections. Case persons had laboratory-confirmed D. medinensis during 2013–2017. Each case person was matched to one to three controls without history of disease by age, gender, and residency in the village where the case person was likely infected. We estimated odds ratios (ORs) using simple conditional logistic regression. We enrolled 25 case persons with 63 matched controls. Dracunculiasis was associated with consumption of untreated water from hand-dug wells (OR: 13.4; 95% CI: 1.7–108.6), but neither with consumption of aquatic animals nor presence of infected dogs in villages. Unsafe water consumption remains associated with dracunculiasis. Education of populations about consuming safe water and using copepod filters to strain unsafe water should continue and expand, as should efforts to develop and maintain safe drinking water sources. Nevertheless, the peculiar epidemiology in Chad remains incompletely explained. Future studies of dogs might identify other risk factors.