Comparative analysis between median values of the right lobe (RL) and left lobe (LL). The length of the boxes represents the interquartile range where 50% of values occur. Bars shows the minimum and maximum values, median, and quartiles. The line through the middle of each box represents the median.

Comparative analysis between the first measurement of the right lobe (RL) and median of the RL.

Comparative analysis between the first measurement of the left lobe (LL) and median of the LL. 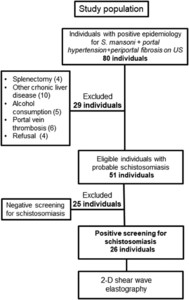 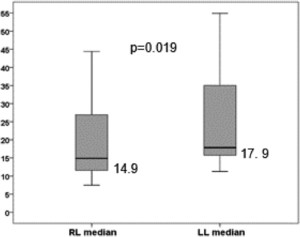 2-D Shear Wave Elastography for the Evaluation of Liver Fibrosis in Hepatosplenic Schistosomiasis: Reliability of a Single Measurement and Inter-Hepatic Lobe Variability