Risk of malaria in children presenting with gastrointestinal (GI) symptoms (expressed as odds ratio [OR] with 95% CIs).

Time distribution of children with diarrhea after specific antimalarial treatment. 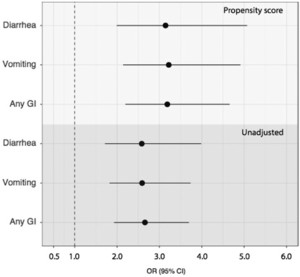 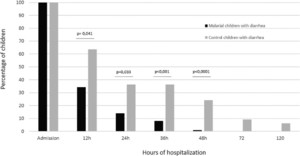 Diarrhea in Children with Plasmodium falciparum Malaria: A Case–Control Study on the Prevalence and Response to Antimalarial Treatment

The role of Plasmodium in the etiology of acute diarrhea in developing countries remains controversial, and gastrointestinal (GI) symptoms are inconsistently reported in malaria. In this observational case–control study, we investigated the prevalence and risk factors for GI symptoms in hospitalized malarious children aged 1 month to 5 years in northern Uganda. Children with a diagnosis of Plasmodium falciparum malaria were enrolled as cases, and feverish children in whom malaria was excluded were enrolled as controls. Among 451 malarious children, 46.1% had GI symptoms at admission. Compared with controls, the frequency of diarrhea (24.8% versus 11.2%, P < 0.001) and vomiting (35.5% versus 17.5%, P < 0.001) was significantly higher in children with malaria, who had a higher chance of showing either vomiting (odds ratio [OR]: 3.22; 95% CI: 2.14–4.91) or diarrhea (OR: 3.14; 95% CI: 1.99–5.07) at hospital admission. A subgroup analysis performed in children with severe malaria, severe anemia, or high-grade fever confirmed these results. Diarrhea was more frequent in infants and children younger than 3 years than in older children. The analysis of 71 malarious children with diarrhea who received intravenous artesunate showed that the symptom resolved within the first 24 hours since the beginning of the treatment in 85.9% of cases. The 3-fold higher prevalence of diarrhea and vomiting in malarious children compared with febrile controls may provide rationale for incorporating malaria testing in the symptom-guided diagnostic approach of the young child with diarrhea and vomiting in malaria-endemic settings.