Length of individual patient treatment. (A) Group 1: multiple-drug therapy for multibacillary leprosy patients recommended by the WHO (MDT/MB/WHO); (B) Group 2: MDT/MB/WHO and itraconazole; and (C) Group 3: controls.

Results from the treatment (multiple drug therapy for multibacillary leprosy patients recommended by the WHO [MDT/MB/WHO] and itraconazole) of lobomycosis of the ear. (A) Forest resident in the municipality of Sena Madureira, state of Acre, with a history of a trauma involving an Amazonian plant. He had previously undergone treatment with itraconazole + surgery without improvement. (B) Total remission and cure after discharge (June 30, 2009). Source: Acre Dermatology Service. 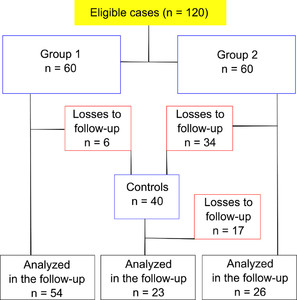 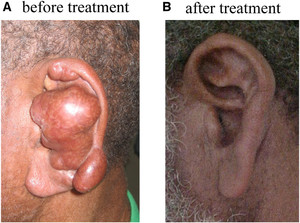 Multidrug Therapy for Leprosy Can Cure Patients with Lobomycosis in Acre State, Brazil: A Proof of Therapy Study

Lobomycosis, also referred to as lacaziosis, is an endemic cutaneous and subcutaneous fungal disease that mainly affects Amazonian forest dwellers in Brazil. There is no disease control program in place in Brazil, and antifungal therapy failures are common, and the therapy is inaccessible to most patients. We performed a randomized, unblinded clinical trial testing the cure rate of multiple drug therapy (MDT) for leprosy with surgical excision, with or without itraconazole. A control arm consisted of patients who did not adhere to either therapeutic regimens but continued to be followed up. Multiple drug therapy consisted of monthly supervised doses of 600 mg rifampicin, 300 mg clofazimine, and 100 mg dapsone, in addition to daily doses of 50 mg clofazimine and 100 mg dapsone. The patients in the MDT plus itraconazole arm also received itraconazole 100 mg twice daily. We followed up 54 patients from the MDT group and 26 patients from the MDT plus itraconazole group for an average of 4 years and 9 months. The 23 controls were followed up for 6 months on average. The following endpoints were observed: 1) unchanged (no apparent improvement), 2) improved (reduction in lesion size and/or pruritus), and 3) cured (complete remission of the lesions, no viable fungi, and no relapse for 2 years after the end of the drug treatment). The results indicated a significantly greater likelihood of cure associated with the use of multidrug therapy for leprosy with or without itraconazole when compared with the control group. The addition of itraconazole to MDT was not associated with improved outcomes, suggesting that MDT alone is effective.