Procedural changes implemented during the three time periods of blood culture surveillance. The detailed results of period 1 are described in a previous publication.8 This figure appears in color at www.ajtmh.org.

Breakdown of blood cultures sampled in Sihanouk Hospital Center of Hope from July 2016 to October 2019 (periods 2 and 3). * In five episodes, two different pathogens were retrieved from the same culture. 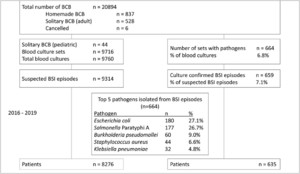 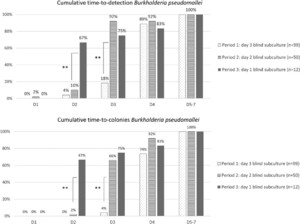 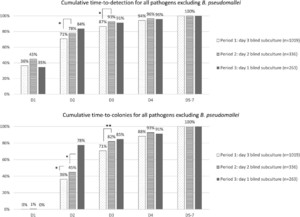 Nonautomated Blood Cultures in a Low-Resource Setting: Optimizing the Timing of Blind Subculture

Laboratory procedures for blood cultures in a hospital in Phnom Penh were adapted to optimize detection of Burkholderia pseudomallei, an important pathogen in this setting. The effects of these changes are analyzed in this study. Blood cultures consisted of two BacT/ALERT bottles (bioMérieux, Marcy-l’Etoile, France). Growth was detected visually by daily inspection of the bottles. In 2016, the aerobic–anaerobic pair (FA/FN FAN) was substituted by an aerobic pair of BacT/ALERT FA Plus bottles. Blind subculture (BS) (subculture in the absence of visual growth) was advanced from day 3 to day 2 of incubation in July 2016. In July 2018, it was further advanced to day 1 of incubation. From July 2016 to October 2019, 9,760 blood cultures were sampled. The proportion of cultures showing pathogen growth decreased from 9.6% to 6.8% after the implementation of the laboratory changes (P < 0.001). Advancing the BS from day 3 to day 2 led to an increased proportion of pathogens detected by day 3 (92.8% versus 82.3%; P < 0.001); for B. pseudomallei, this increase was even more remarkable (92.0% versus 18.2%). Blind subculture on day 1 similarly increased the proportion of pathogens detected by day 2 (82.9% versus 69.0% overall, 66.7% versus 10.0% for B. pseudomallei; both P < 0.001). However, after implementation of day 1 subculture, a decrease in recovery of B. pseudomallei was observed (12.4% of all pathogens versus 4.3%; P < 0.001). In conclusion, earlier subculture significantly shortens time to detection and time to actionable results. Some organisms may be missed by performing an early subculture, especially those that grow more slowly.