A map of the city of Entebbe, Uganda, showing the sites where the strains of Aedes aegypti used in this study were collected. UVRI = Uganda Virus Research Institute. 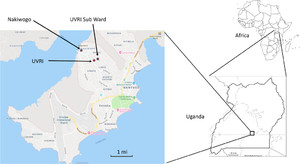 We evaluated the vector competence of three strains of Aedes aegypti formosus from Entebbe, Uganda, for Zika virus (ZIKV). The aim was to find out if these strains were competent or incompetent vectors for ZIKV, to explain the lack of ZIKV outbreaks in the city of Entebbe. We observed transmission rates ranging from 33% to 78%; however, these rates were not statistically significantly different, suggesting that there were no real differences among the strains. Nonetheless, this showed that populations of Ae. aegypti formosus in Entebbe are competent vectors for ZIKV. The reason why there is no detectable transmission of ZIKV to humans in Entebbe is currently unknown. The lack of detectable transmission despite Ae. aegypti formosus competence for ZIKV suggests that other parameters, such as preference for nonhuman blood, may be limiting its ability to serve as a vector.

Between 1947 and 1963, Zika virus (ZIKV), family Flaviviridae, genus Flavivirus, was isolated 17 times from Zika Forest near Entebbe and Lunyo Forest in Entebbe, in south central Uganda. 1–3 However, human cases have never been detected in the city of Entebbe and in villages surrounding Zika and Lunyo Forests. Furthermore, ZIKV antibodies were not detected in human sera collected in villages near Zika Forest, and from the city of Kampala 15 miles north of Zika Forest, 4 suggesting limited ZIKV transmission to humans within this area. Interestingly, ZIKV antibodies were detected in human sera collected from other parts of Uganda, 4,5 suggesting widespread ZIKV transmission outside the Entebbe and Kampala areas. Recently, Kayiwa et al. 6 reported three human Zika cases in Uganda, the first laboratory-confirmed ZIKV infections in the country since 1964. 7 The three cases were detected in the village of Nkokonjeru, approximately 63 km (39 miles) from Entebbe. Because human ZIKV infections have never been detected in the city of Entebbe and the surrounding villages, we hypothesized that populations of the main vector, Aedes aegypti formosus, within the area may not be competent vectors for ZIKV. To test this hypothesis, we conducted vector competence studies of Ae. aegypti formosus populations from the city of Entebbe for ZIKV.

In 2017, we collected Ae. aegypti formosus eggs from three locations within the city of Entebbe by using ovitraps. Ovitraps were 22-Oz black plastic cups (Giacona Container Corporation, Jefferson, LA) with seed germination paper (Anchor Paper Company, St. Paul, MN) as the oviposition substrates. The three locations were 1) Nakiwogo village (0°4′51.6936″N: 32°27′0.4716″E), a fishing village on the northern shores of Lake Victoria; 2) the Uganda Virus Research Institute (UVRI) (0°4′32.5308″N: 32°27′27.5688″E), a public health research and diagnostic laboratory facility that is frequented by a large number of people daily; and 3) the UVRI Subward (0°4′34.266″N: 32°27′28.1088″ E), a residential area adjacent to the UVRI. All these sites are within a mile radius of each other (Figure 1). The eggs were shipped to the CDC laboratory in Fort Collins, CO, where the transmission experiments were conducted. The Poza Rica strain of Ae. aegypti, an excellent laboratory vector for ZIKV, 8 was used as a control strain. The Poza Rica strain was established from collections within the city of Poza Rica, Mexico (20.5271°N, 97.4629°W), in 2012. 8 The laboratory generations of the Poza Rica strain were not known, but all Ugandan strains were less than five generations.

The mosquito strains used were all raised under identical conditions. The eggs were hatched in deionized water, and the larvae fed on a suspension of liver powder (MP Biomedicals LLC, Solon, OH). Immature and adult mosquitoes were raised and/or maintained at constant temperature of 28°C, relative humidity 80%, and 16:8 (light:darkness) photoperiod in Forma environmental chambers (Thermo Electron Corporation, Marrietta, OH). Adult mosquitoes were fed on 10% sugar solution and starved 24 hours before feeding on an infectious blood meal.

We used the ZIKV isolate MR766 isolated in Uganda in 1947 1 because it was isolated within 6 miles from where the mosquito strains were collected. The MR766 strain had a history of 149 passages in unknown sources, including suckling mouse brain, and two known passages in African green monkey kidney (Vero) epithelial cells. Five- to 6-day-old female Ae. aegypti were orally fed on an infectious blood meal through an artificial Hemotek membrane feeder (Discovery Workshops, Accrington, United Kingdom). Nine to 22 adult females were fed on a dose of 6.9 log10 plaque-forming units (PFU)/mL of ZIKV (MR766) for the Nakiwogo, UVRI, UVRI Subward, and Poza Rica (Control) strains. For a hybrid strain of Nakiwogo and UVRI, 20 females were fed on of 7.2 log10 PFU/mL (Table 1). Female mosquitoes were allowed to feed for 45 minutes on the heated artificial blood meals (37°C) containing 33% (vol/vol) defibrinated goose or calf-washed erythrocytes (Colorado Serum Company, Denver, CO), 33% (v/v) heat-inactivated fetal bovine serum (FBS) (Omega Scientific, Inc., Tarzana, CA), 33% (v/v) of each individual virus in cell culture fluid (resulting in a final concentration ranging from 6.9 to 7.2 log10 PFU/mL) (Table 1), and 1% (v/v) of 0.25 μM adenosine triphosphate as a phagostimulant. After blood feeding, mosquitoes were cold anesthetized for sorting, and engorged females were held at 28°C with a relative humidity of 80% for an extrinsic incubation period of 14 days. Zika virus viremia in infected humans is currently not well understood; a range of 0.7 and 6.5 logs has been reported 9 ; therefore, the viremias we used in our experiments (6.9 logs) are slightly higher than those so far observed in natural human infections.

Infection, dissemination, and transmission rates of stains of Ae. aegypti formosus from Entebbe, Uganda, for ZIKV

After a 14-day extrinsic incubation period, each mosquito was anesthetized with triethylamine (Flynap®; Carolina Biological Supply Company, Burlington, NC), the proboscis inserted into 10-μL capillary tubes containing immersion oil (Cargille Laboratories, Cedar Grove, NJ), and allowed to salivate for approximately 45 minutes. The legs and wings were removed from each anesthetized mosquito and placed in microcentrifuge tubes with 500 μL of complete media composed of Dulbecco’s modified Eagle’s essential medium complete with penicillin (100 U/mL), streptomycin (100 mg/mL), 10% FBS, amphotericin B (50 μg/mL), and a sterile copper bead (Daisy Outdoor Products, Rogers, AR). After salivation, the mosquito bodies were placed into 1.5 mL tubes with 500 μL of complete media, and the salivary capillary tubes (Sigma-Aldrich, St. Louis, MO) were placed into separate 1.5 mL tubes with 350 μL of complete media. Samples with mosquito bodies and legs/wings were each triturated for 4 minutes at a frequency of 26 cycles/second using a Mixer Mill 300 (Retsch, Newton, PA). Samples containing salivary capillary tubes were centrifuged briefly to flush the saliva into the 1.5 mL tubes. Each sample was tested for cytopathic effects on Vero cells.

These results show that the Entebbe strains of Ae. aegypti formosus tested in this study are susceptible to infections with ZIKV and can potentially transmit ZIKV. This is because the rates of these strains were not statistically significantly different from those of a known highly susceptible control strain, Poza Rica (Tables 1 and 2). The lack of statistical differences among rates of all field-collected strains of Ae. aegypti formosus (Table 2) suggests no real differences in vector competence among these strains.

Our data show that populations of Ae. aegypti formosus in the city of Entebbe are competent vectors for ZIKV. The fact that human ZIKV infections have not been detected in Entebbe and surrounding areas is puzzling, especially because ZIKV is maintained in forested areas in and around Entebbe. 1–3 In addition, bands of several species of monkeys consistently raid plantations and roam into residential areas, 10 which brings them into frequent contact with domestic populations of Ae. aegypti formosus.