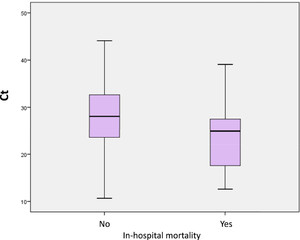 Controversy exists in the literature regarding the possible prognostic implications of the nasopharyngeal SARS-CoV-2 viral load. We carried out a retrospective observational study of 169 patients, 96 (58.9%) of whom had a high viral load and the remaining had a low viral load. Compared with patients with a low viral load, patients with a high viral load did not exhibit differences regarding preexisting cardiovascular risk factors or comorbidities. There were no differences in symptoms, vital signs, or laboratory tests in either group, except for the maximum cardiac troponin I (cTnI), which was higher in the group with a higher viral load (24 [interquartile range 9.5–58.5] versus 8.5 [interquartile range 3–22.5] ng/L, P = 0.007). There were no differences in the need for hospital admission, admission to the intensive care unit, or the need for mechanical ventilation in clinical management. In-hospital mortality was greater in patients who had a higher viral load than in those with low viral load (24% versus 10.4%, P = 0.029). High viral loads were associated with in-hospital mortality in the binary logistic regression analysis (odds ratio: 2.701, 95% Charlson Index (CI): 1.084–6.725, P = 0.033). However, in an analysis adjusted for age, gender, CI, and cTnI, viral load was no longer a predictor of mortality. In conclusion, an elevated nasopharyngeal viral load was not a determinant of in-hospital mortality in patients with COVID-19, as much as age, comorbidity, and myocardial damage determined by elevated cTnI are.