Lymphedema, violaceous nodules, and warty appearance of the lower limbs. 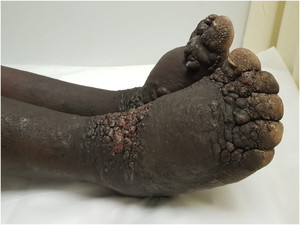 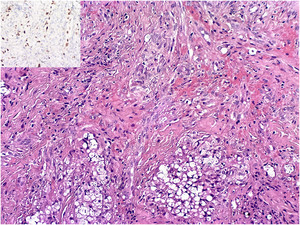 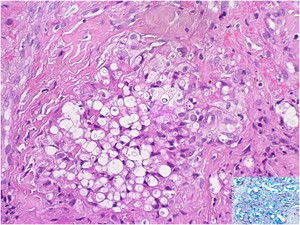 A 38-year-old man presented at the largest hospital in Africa with 6 years’ history of progressive lower limb swelling and cutaneous lesions. The patient was seropositive HIV and antiretroviral therapy naive. Physical examination confirmed his generally unwell status due to emaciation, generalized lymphadenopathy, and massive lymphedema of the lower limbs. Hyperpigmented plaques on the legs were intermixed with violaceous nodules. A prominent warty appearance and toenail destruction were evident (Figure 1). The clinical differential diagnosis included KS and acroangiodermatitis of Mali (pseudo-KS).

The HIV viral load was 4,75,000 copies/mL, the CD4 count was 5 cells/µL, and a positive serum cryptococcal latex agglutination test was confirmed. Histopathological examination of a skin lesion confirmed the presence of colesional KS and cryptococcosis (Figures 2 and 3).

Antiretroviral therapy and antifungal therapy were initiated. Unfortunately, death ensued while this patient was hospitalized.

Cutaneous manifestations of HIV may develop in more than 90% of infected individuals.1,2 However, the co-existence of KS and cryptococcosis within a cutaneous lesion is a very rare occurrence.3–7 Although antiretroviral therapy has led to a reduction in the incidence of KS and OIs, these continue to be the presenting conditions in the context of undiagnosed HIV infection. Contributing factors may also include suboptimal access to healthcare, nonadherence to antiviral therapy, or drug resistance. The presence of OIs is often an indicator of severe immunosuppression with disseminated disease. Therefore, the recognition of cutaneous involvement by OIs should expedite access to treatment.8

This report contributes to the expanding spectrum of colesional cutaneous pathology that manifests because of HIV-induced immunosuppression.