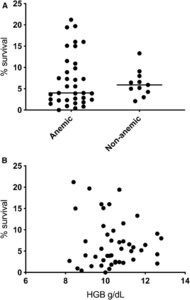 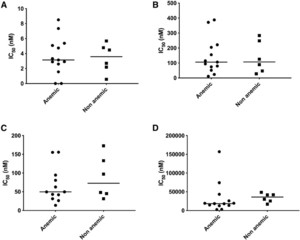 Artemisinin combination therapies are the current frontline therapy for falciparum malaria. Artemisinin is activated by heme iron, and the consequent production of reactive oxygen species and carbon-centered radicals results in rapid parasite clearance. Red blood cells (RBCs) from anemic iron-deficient individuals have decreased levels of heme, and such deficiencies are highly prevalent among children and pregnant women in malaria-endemic countries. We, therefore, investigated the possibility that host anemia could impair artemisinin activity and alter the drug sensitivity of artemisinin-resistant strains of Plasmodium falciparum. We collected RBCs from anemic (n = 35) and nonanemic (n = 11) Gambian children between the ages of 2 and 24 months. Parasites grown in RBCs from both groups were assessed in vitro using the ring-stage survival assay with artemisinin-resistant and artemisinin-sensitive strains of P. falciparum. No differences were found in artemisinin sensitivity (P > 0.05), and there was no correlation between artemisinin activity and host hemoglobin levels. Standard antimalarial drug activity assays for representatives of the major classes of antimalarial drugs found no differences in the IC50 values against P. falciparum between anemic and nonanemic RBCs. We conclude that host anemia does not influence artemisinin activity.

Artemisinin combination therapies have played an important role in the drastic decline in global malaria. 1 However, recent emergence of resistance to artemisinin threatens these advances. 2

Artemisinin causes a rapid reduction in parasitemia followed by clinical recovery. Two molecular steps are necessary for artemisinin’s antimalarial activity. First, the molecule is activated by heme iron to generate both reactive oxygen species (ROS) and carbon-centered radicals. 3,4 Subsequently, these radicals and ROS bind and inflict damage on multiple parasite proteins, including PfTCTP 5 and PfATP6, 6 causing depolarization of the parasite’s mitochondria and directly compromising parasite lipids and DNA. 7,8

The efficacy of artemisinin against malaria parasites has been linked to the amount of free heme in the host red blood cells (RBCs). 9 The malaria parasite uses hemoglobin as its primary source of amino acids, and the level of free heme increases as the parasite digests hemoglobin throughout its 48-hour intraerythrocytic life cycle. Hemoglobin digestion begins in the early ring stage and is most active during the trophozoite stage. Consequently, artemisinin activity is lower in ring-stage parasites than matured trophozoites. 3,10 Consistent with this, artemisinin-resistant Plasmodium falciparum isolates show resistance only during the ring stage in vitro. 9 When exposed to artemisinin during the ring stage, resistant parasite isolates enter dormancy and upregulate their unfolded protein (stress) response. 11–13 A recent publication has shown that mutations in PfKelch13, which confer resistance to artemisinin, decrease the endocytosis of hemoglobin in the young ring stage, which decreases the availability of heme and thereby decreases the activation of artemisinin. 14 Because RBCs from individuals with iron deficiency anemia (IDA) have low levels of hemoglobin, we hypothesized that the low levels of hemoglobin would decrease the activity of artemisinin in individuals with IDA.

In addition to reduced levels of hemoglobin, RBCs from individuals with IDA have increased intracellular levels of ROS. 15,16 We reasoned that alternatively to the possible decrease in artemisinin activity hypothesized earlier, the increased baseline level of intracellular radicals could amplify the oxidative stress generated by artemisinin inside RBCs with ring-stage parasites, which could potentially increase the activity of artemisinin. For example, there is evidence that in vitro artemisinin activity is enhanced by the addition of free radical–generating compounds such as doxorubicin and miconazole. 17

The study was approved by the Gambia Government/MRC Joint Ethics Committee (SCC1477). The study was conducted according to the principles of the Declaration of Helsinki, and all participant caregivers provided signed informed consent.

Potential participants between the ages of 6 and 24 months were identified during their attendance at the routine immunization clinic run weekly by the MRC-Unit The Gambia Keneba primary care clinic during March–May of 2017 and August–October of 2018. At this regularly scheduled visit, children are routinely assessed for anemia by the nursing staff using a finger-prick blood sample. Children were recruited for blood donation to this study based on hemoglobin status (nonanemic Hgb > 11 g/dL; anemic 7 g/dL > Hgb < 11 g/dL). Other inclusion criteria included being resident in the study area and caregiver assent to donate a blood sample. The exclusion criteria included 1) any acute infection including malaria, 2) congenital disorders, 3) chronic diseases, and 4) taking regular medication.

After recruitment and informed consent, children underwent a one-time venous blood draw of 3 mL. This blood was then used for hematology and malaria-related assays described as follows.

Malaria infection was assessed by a thick smear. Slides were stained with 5% Giemsa and read at ×100 with an optical microscope against 500 white blood cells. 22

Artemisinin resistance in vitro was assessed by using the “RSA-sorbitol only” method as previously described. 23 In brief, donor RBCs were infected with artemisinin-resistant P. falciparum strain IPC 4912 – K13 I543T (Bei Resources, catalog no. MRA 1241, Manassas, VA) (n = 46) and artemisinin-sensitive P. falciparum strain IPC 5188 (Bei Resources, catalog no. MRA 1239) (n = 19). For each isolate, parasites were tightly synchronized with sorbitol to obtain 3-hour rings at 1% parasitemia. Rings were exposed to 700 nM dihydroartemisinin (DHA) (donated by the World Wide Antimalarial Resistance Network [WWARN]) diluted in 0.1% dimethyl sulfoxide (DMSO) or 0.1% DMSO alone in complete media (RPMI-1640, 0.2% glucose solution, 25 mM HEPES buffer, 10 µg/mL hypoxanthine, 2 mM L-glutamine, 50 µg/mL gentamicin solution, and 0.5% albumax II). After 6 hours, wells were washed and parasites were then incubated in completed media for an additional 66 hours. Giemsa-stained thin-smear slides were prepared and viable parasites were then counted in approximately 15,000 RBCs. Parasites were assessed using standardized morphology and categorized as “viable” or “‘dead” at the time the slides were made. The percentage survival of P. falciparum strains IPC 4912 and IPC 5188 in each blood sample was calculated using the ratio between live parasites in the DHA-exposed well and live parasites in the DMSO-exposed well. 10

Unpaired t-tests (Mann–Whitney) were performed to compare the survival percentages and IC50 values. In all analyses, P-value < 0.05 was considered significant. GraphPad Prism software 7 was used for all analyses.

The majority of donors (76%) were anemic, which is consistent with our previously published data on anemia prevalence in this population. 25 Forty-seven percent of the anemic donors were female (n = 21), but females made up 76% of the nonanemic donor group. This finding is also consistent with our previous work which has shown that after 6 months, boys are more likely to be anemic because of their faster growth rates. 26,27 Standard hematology measurements, including MCV, MCHC, and RDW, were all consistent with the diagnosis of IDA in the anemic group (Table 1).

NA = not applicable. Hematologic tests were performed in MRC Keneba laboratories using a Medonic M20M GP. Numerical values reflect the mean value of all individuals, and values in parentheses indicate SD. Values in the column marked “Normal range” are the normal range of values for each parameter in children aged 6–30 months. 36

Next, we used the RSA to assess sensitivity to DHA of the IPC 4912 artemisinin-resistant strain. The RSA measures the ability of a parasite to survive a short exposure to artemisinin and simulates the in vivo pharmacokinetics of artemisinin. No differences were observed in the percentage survival between parasites grown in RBCs from anemic versus nonanemic donors. The median percentage survival was 4% in RBCs from anemic donors and 5.9% in RBCs from nonanemic donors (P = 0.6) (Figure 1A and B). Further analysis showed no correlation between RBC hemoglobin concentration and percentage parasite survival (r = 0.06; P = 0.6) (Figure 1C). The control strain, IPC 5188, did not survive in either anemic or nonanemic RBCs.

Finally, we investigated the possibility that host anemia could impact the efficacy of representatives of each of the major classes of antimalarial drugs. No difference in median IC50 was observed for DHA (Figure 2A), CQ (Figure 2B), LUM (Figure 2C), or PYR (Figure 2D) between parasites grown in RBCs from anemic and nonanemic donors. There was no correlation between hemoglobin concentration and the IC50 values of DHA (P > 0.05).

Artemisinin remains highly effective in Africa, but artemisinin resistance is on the rise in Southeast Asia. 28 Parasite resistance to artemisinin is defined clinically as delayed clearance of parasites from the bloodstream of malaria patients treated with artemisinin. In vitro resistance is measured using the RSA, which assesses the survival of ring-stage malaria parasites exposed to a short course of artemisinin. 10 In artemisinin strains of P. falciparum such as the one used in this study, resistance is only found in the ring stage and disappears when the parasite enters the more metabolically active trophozoite stage. The trophozoite stage parasite produces more heme as it digests hemoglobin, which produces more free heme and ROS, all of which activate artemisinin.

Despite the fact that artemisinin resistance and delayed parasite clearance after treatment with artemisinin are still rare in Africa, it is important to evaluate host and environmental factors, such as the high rate of anemia in sub-Saharan Africa, that might have an influence on the emergence of resistance. On the one hand, the high ROS in anemic cells could increase drug efficacy, while on the other the lower heme concentration in the anemic cells could decrease efficacy.

Iron-deficient red cells are high in ROS and, therefore, have high levels of oxidative stress. 29 Survival of parasites in the RSA has been linked to 1) genetic polymorphisms on the Kelch 13 propeller domain (K13), 30,31 2) alterations in artemisinin protein targets (e.g., P. falciparum phosphatidylinositol-3-kinase, which is a binding partner of K13 31,32 ), and 3) upregulation of the cellular stress response or the unfolded protein response (UPR) to withstand damage from oxidative stress. 33 The strain of P. falciparum used in this study, IPC 4912, 11,30–32 has most of these characteristics. However, amplification of oxidative stress in iron-deficient RBCs did not improve the efficacy of artemisinin against the ring-stage parasites. This could be due to the upregulated UPR ensuring an enhanced adaptive response to oxidative stress. 13 Futhermore, our results provide support for the idea that ROS generated as a result of artemisinin activation through hemoglobin digestion are crucial for parasite killing. 14

We also show that iron deficiency does not affect the activity of other antimalarial drugs in the standard drug sensitivity assay. This is not surprising as the reported mode of action of these drug classes generally differs from that of artemisinin, and none depends on free heme or ROS. 33,34

The chief limitation of this study is that the majority (75%) of the children who donated RBCs to the study were anemic, and that even in the nonanemic group, the mean hemoglobin level was very close to the level that defines anemia (11.94 ± 0.6). The Gambia, like other low-income countries in sub-Saharan Africa, has a large burden of anemia of which the majority is caused by iron deficiency. 20 The participants were all aged less than 5 years and, therefore, part of a group that is the very vulnerable to anemia and iron deficiency. 35

In conclusion, these results indicate that host anemia does not influence falciparum malaria parasite sensitivity to artemisinin. These reassuring findings suggest that malaria control programs operating in areas with high prevalence of anemia do not need to modify their antimalaria treatment strategy.