Median timing of initiation and duration of supportive therapies provided in the ICU.

(A) Digital necrosis complicating histologically proven purpura fulminans in a 69-year-old woman without comorbidity. She had a 4-fold increase in serology for Queensland tick typhus (QTT) infection; her fingers later required digital amputation. (B) Chest X-ray demonstrating bilateral patchy non-confluent alveolar opacification in a 26-year-old woman without comorbidities who presented with a maculopapular rash, deranged liver function tests, thrombocytopenia, and a prolonged prothrombin time; she had a single serological titer of 1:1,024 for QTT. She required ICU admission for vasopressor support but required only supplemental oxygen by a Hudson mask and made a complete recovery. (C) Chest X-ray demonstrating right middle and lower lobe pneumonia and early left lower lobe consolidation in a 45-year-old male patient with a history of tick bite and a 4-fold increase in serology for QTT infection. He required intubation and ventilation for 16 days but made a complete recovery. These images have been published previously.3

Mean fluid balance over the first 3 days of each patient’s ICU admission over the course of the study. 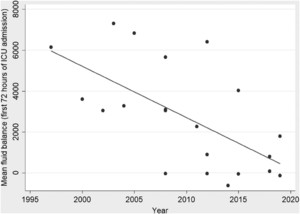 Scrub typhus—a common and well-described pathogen in Southeast Asia—often causes a mild, self-limiting illness, but it can also lead to multi-organ failure if untreated.5,6 There are fewer data describing the clinical course of QTT. It had been believed to cause only mild symptoms,7 but recent reports suggest that it can also cause disabling and lethal disease.3,8,9

Scrub typhus and QTT are uncommon causes of critical illness in Australia. However, a high index of suspicion for the infections is important, as diagnosis requires specific testing,1 and effective antibacterial therapy is often not included in empirical regimens for patients with sepsis.10–12

Although there are series from India,13 South Korea,14 Nepal,15 and China16 that have described the clinical course of rickettsial infection admitted to the ICU, none, to our knowledge, have been published from Australia.

This retrospective study was performed at Cairns Hospital, a 531-bed tertiary referral center in Far North Queensland, tropical Australia. Patients were eligible for inclusion if they were admitted to the hospital’s ICU between January 1997 and December 2019 with a laboratory-confirmed diagnosis of scrub typhus or QTT. Definite infection was defined as a positive blood PCR or a 4-fold increase in titers of paired serological samples. Probable infection was defined as a single serological titer ≥ 128 with a clinically compatible syndrome (≥ 2 of fever, rash, eschar, myalgia, or headache). Patients were excluded if, on chart review, a non-rickettsial diagnosis was determined to be more likely.

The Far North Queensland Human Research Ethics Committee provided ethical approval for the study (HREC/17/QCH/66–1148 QA). As the data were retrospective and de-identified, the committee waived the requirement for informed consent.

Twenty-two patients were admitted to the ICU with a laboratory-confirmed diagnosis of rickettsial infection during the study period. This included 13 (64%, five definite, eight probable) patients with scrub typhus and 9 (36%, four definite, five probable) patients with QTT. Almost two-thirds (14/22; 64%) had no comorbidity. No patient received anti-rickettsial antibiotics before their hospital admission. The patients’ other demographic and epidemiological characteristics are presented in Table 1.

All values represent the absolute number (%) and the median (interquartile range, range).

The median (interquartile range [IQR]) duration of symptoms before hospital presentation was 7 (5–10) days. Rickettsial infection was considered in the initial differential diagnosis of 9/22 (41%). The most common alternatively considered diagnoses were pneumonia (9/22 40%) and leptospirosis (9/22 40%). The patients’ symptoms and signs documented at the time of hospital presentation are detailed in Table 2.

The patients’ laboratory findings at their hospital admission and during their hospitalization are presented in Table 3. There were 9/22 patients (40%) with simultaneously prolonged clotting times and low fibrinogen—consistent with disseminated intravascular coagulation,20 five (56%) of whom had abnormal bleeding. Two of these patients developed purpura fulminans.21

IQR = interquartile range. The most deranged values (range) during the patient’s hospitalization are also presented.

Outside of the reference range provided by the reporting laboratory (Queensland Pathology).

Number of patients with this laboratory value measured on at least one occasion during their hospitalization.

A similar number of patients with scrub typhus and QTT required intubation (Table 4). A further 8/22 patients (36%) required high-flow oxygen; only 2/22 did not require supplemental oxygen. The median (IQR) PaO2/FiO2 ratio in the 20 patients in whom it could be calculated was 140 (106–190). There were four (18%) patients with severe and six (27%) with moderate ARDS.

Requirement of supportive therapies by type of rickettsial infection

Vasopressor support was required in 15/22 (68%) for a median (IQR) duration of 2.1 (0.6–3.5) days. Noradrenaline (10/15; 67%) was the most frequently used vasopressor. Renal replacement therapy (RRT) was required in 5/22 (23%) and was initiated in all cases for oliguric or anuric renal failure with volume overload (Table 5). One patient requiring RRT died after 2.1 days; none of the remaining patients subsequently required long-term dialysis. Intravenous fluid therapy became more restrictive during the study period with the mean initial 72-hour fluid balance declining as the study proceeded (Spearman’s rho = −0.62, P = 0.003) (Figure 3).

Patient died at this point.

Red blood cell transfusion was delivered to 5/22 (23%) and fresh frozen plasma to 4/22 (18%). Despite the ubiquity of thrombocytopenia, no platelet transfusions were administered. Only 2/22 (9%) had a clinically significant hemorrhage—both upper gastrointestinal bleeds—but neither had thrombocytopenia or coagulopathy at the time.

Corticosteroids were prescribed in 9/22 (41%) for a median (IQR) duration of 4 (1–5) days. Nasogastric feeding, deep venous thrombosis, and stress ulcer prophylaxis were provided to all patients, unless there was a contraindication.

Australian patients admitted to the ICU with rickettsial infections have excellent outcomes in the country’s well-resourced health system. The reported case fatality rate of ICU patients with scrub typhus in international studies varied from 10% to 24%,13–16 but there were no deaths from scrub typhus in 22 years at this center and just one (1/9; 11%) from QTT. This is despite the cohort having APACHE-II and SOFA scores that would have predicted an overall case fatality rate of approximately 20%.17,18

In this small series, it is not possible to define which components of care were responsible for these encouraging outcomes; however, prompt anti-rickettsial antibiotic therapy and early access to sophisticated multimodal ICU support are likely to have contributed. Patients were ventilated using protective lung strategies, and fluid management was generally conservative. Standard vasopressors were used, indications for RRT were conventional, and blood product usage was restrictive. Over 40% of the patients had severe thrombocytopenia (< 50 × 109/L) at some point during their hospitalization, but no platelet transfusions were administered, and no thrombocytopenic patient had major bleeding. Approximately 40% of the cohort received corticosteroids; however, this was usually delivered as only one of several concurrent interventions.

Pulmonary involvement heralded a more complicated course; despite this, 90% of patients with moderate to severe ARDS survived. Patients with a greater positive fluid balance were more likely to be intubated; it is therefore notable that fluid prescription became more restrictive over the course of the study, an approach which may have contributed to the good outcomes.22

Severe QTT has been thought to be rare.7 However, in this series, nine patients with QTT required ICU support, including one who died and two who required digital amputation. The clinical findings of patients with QTT in this cohort are consistent with the pathophysiology described in a murine model of the disease.23 Mice infected experimentally with R. australis developed a severe systemic vasculitis and multifocal hepatic necrosis and demonstrated extensive rickettsial invasion of the pulmonary alveolar septa, the renal glomeruli, and interstitium. Higher inoculums of R. australis were uniformly lethal.

Indeed, the pathophysiology of severe human QTT appears likely to be similar to that of scrub typhus and Rocky Mountain spotted fever, two rickettsial conditions whose pathological hallmark is also endothelial infection and inflammation.24,25 This endothelial inflammation leads to microvascular dysfunction, increasing vascular permeability, which in turn increases the risk of shock and lung injury.24,26 Endothelial activation may lead to widespread platelet adhesion and microvascular thrombosis, exacerbating the systemic microvascular dysfunction and increasing the likelihood of multi-organ failure.27,28

The patients in this cohort presented a median (IQR) of 7 (5–10) days after symptoms developed. Most had not sought medical advice before their presentation, and none had received anti-rickettsial antibiotic therapy, echoing findings from other studies that have shown that delayed antibiotic therapy increases the likelihood of severe rickettsial disease.29

It was notable that almost two-thirds of the patients in this ICU series had no comorbidity, highlighting the organisms’ pathogenic potential. The absence of any pediatric cases—the youngest patient was 22 years—was also striking; this is despite local children presumably having a similar exposure risk.30

This retrospective study has limitations, with patients’ symptoms and signs especially likely to be incompletely described. A minority had a PCR-confirmed diagnosis or a 4-fold increase in serology; although patients were only included if they satisfied prespecified criteria similar to those in the international literature. Patients with scrub typhus and QTT are presented together, and some may take issue with this approach. However, there are significant similarities in the infections’ pathophysiology and management, and hence, we felt that it was reasonable to present them together.3 The small sample precludes definitive conclusions about optimal management strategies; however, it provides hypothesis-generating data that might be tested in future prospective studies. The ability to deliver this care in the resource-limited settings—which bear the greatest global burden of rickettsial diseases—will be an essential consideration in this research.

In summary, rickettsial infections uncommonly require ICU admission in Australia but can cause critical illness in patients without comorbidity. Late presentation is likely to increase the risk of severe disease, but despite this, if patients can access prompt, multidisciplinary ICU support, their outcomes are usually excellent.