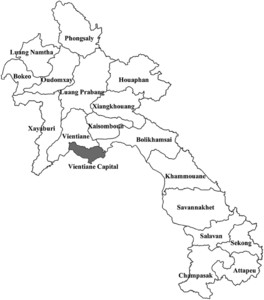 Zoonotic helminths of three rodent species, Bandicota indiaca, Bandicota savilei, and Leopoldamys edwardsi, were investigated in Vientiane capital, Lao PDR. A total of 310 rodents were infected with 11 species of helminth parasites. There were 168 (54.2%) of 310 rodents infected with zoonotic helminths. From our results, there are six recorded zoonotic helminth species, and the highest prevalence was exhibited by Raillietina sp. (30.7%), followed by Hymenolepis diminuta (17.7%), Hymenolepis nana (2.6%), Echinostoma ilocanum (1.9%), Echinostoma malayanum (1.3%), and Angiostrongylus cantonensis (1%). This is the first study of zoonotic helminths in L. edwardsi and the first report of H. diminuta, H. nana, E. ilocanum, and E. malayanum in Bandicota indica and B. savilei, and the first demonstration of A. cantonenensis in B. indica in Lao PDR. From our results, these three rodents are potentially important reservoir hosts of zoonotic helminths. Thus, effective control programs should be considered for implementation to prevent the transmission of these zoonoses in this area.

Zoonotic helminth parasites are considered as neglected diseases by the WHO.1 Although most helminths cause mild symptoms in healthy people, however, the level of severity can increase in cases of immunocompromised and immunosuppressive individuals.2,3 In addition, schoolchildren harbor some of the most intense helminthic infections that significantly impair physical, nutritional, cognitive, and intellectual development.1 Rodents are known as the important reservoir hosts of zoonosis parasites, including helminths.4,5 Helminths in rodents that have been reported to cause human infections in Southeast Asia and the Pacific region include echinostome, Hymenolepis nana, Trichinella spiralis, Hymenolepis diminuta, Raillietina sp., and Angiostrongylus cantonensis.6,7 There are more than 200 species of murid rodents that have been reported in Southeast Asia.7–10 Although there have been several reports of helminth infections in rodents from other parts in Southeast Asia,11–18 studies from Lao PDR are limited. To our knowledge, only one publication has been reported on the helminth fauna of rodents in Lao PDR, Luang Prabang, and Champasak Province.19 They reported four zoonotic helminths (Raillietina sp., H. diminuta, H. nana, and Echinostoma malayanum) in 12 rodent species, and only small number of Bandicota indica (3) and Bandicota savilei (17) were investigated. They found only Raillietina sp., in these two species, whereas the previous studies had reported more than one zoonotic helminth species.20,21 In addition, they have no study about zoonotic helminths in Leopaldamys edwardsi. This rodent was also reported to be the reservoir host of zoonotic helminths.20,21 These three rodent species are commonly hunted for food in Southeast Asia, including in Lao PDR.22,23

Thus, the aim of this study was to investigate the zoonotic helminths in three rodent species, B. indica, B. savilei, and L. edwardsi, from Vientiane Capital in Lao PDR, where there have not been studied until now. As we mentioned earlier, these three rodents are commonly hunted for food. Therefore, we can increase the number of the target rodents by collecting them from the local markets in Vientiane Capital, Lao PDR. The results in this study can fill the gap in the knowledge of the role of these rodents as reservoirs of zoonotic helminthiases in Lao PDR, and might help for the development of control program.

Rodents’ collection and examination for helminths.

In mid-February to mid-April 2020, rodents were collected from three markets (Koudsambath, Nagna, and Dongmarkkhay markets) in Vientiane Capital, Lao PDR (Figure 1). They were hunted and sold for food. Rodent species were identified using morphological criteria.24 Rodents were examined following international standards (the American Veterinary Medical Association Council on Research). The study was approved by the Ministry of Health National Ethics Committee for Health Research, Lao PDR (No. 05/NECHR). The collected helminths were preserved in 70% alcohol, and the recovered helminths were identified using the general helminth identification keys and the specific literature on each helminth.25–28 The parasitological descriptors such as prevalence, mean intensity, and mean abundance were reported as quantitative parameters. The relationship between rodent species and helminth infection was analyzed by chi-squared test. For the potential zoonotic species, we searched from previous human case reports and relevant research publications.

Hymenolepis diminuta (rat tapeworm) and H. nana (dwarf tapeworm) have been reported in humans worldwide.29,30 Humans acquire it by accidentally eating food that is contaminated with the cysticercoid-infected arthropods, such as fleas and beetles.31,32 They are particularly common in children.30,33 Generally, light infection with H. diminuta and H. nana is asymptomatic, whereas heavy infection with these species can cause dizziness, anorexia, weakness, pruritus, abdominal distress, and diarrhea.34,35 In addition, H. nana can cause autoinfection because this worm can directly complete its life cycle without development in any intermediate host. Humans become infected by eating egg-contaminated food. Rodent species have been reported as reservoirs of H. diminuta: B. indica, B. savilei, Berylmys berdmorei, L. edwardsi, Maxomys rajah, Mus caroli, Mus cookii, Rattus andamanensis, and Rattus tanezumi,21,36,37 and reservoirs of H. nana: Hapalomys delacouri, B. indica, B. savilei, M. caroli, Mus cervicolor, M. cookii, Niviventer fulvescens, R. andamanensis, Rattus annandalei, Rattus exulans, Rattus norvegicus, R. tanezumi, and Rattus tiomanicus.19,20,37

Angiostrongylus cantonensis, a rat lungworm, can cause eosinophilic meningitis in humans.47,48 Humans acquire the infection by eating undercooked snails, for example, Achatina fulica, Pila, and Pomacea,49 or slugs, which are infected with larvae of the parasite. This worm has been reported in rat species, R. exulans, R. rattus, and B. indica.50,51

Leopoldamys edwardsi (forest rodent) showed the highest prevalence for helminth infection compared with the other two investigated rodents. Previous studies reported that forest rodents have a higher infection rate than lowland or dryland and settlements.45,52 This may explain that soil moisture in forest enhances survival and the stage development of parasites.53,54 The gastropods, intermediate hosts of echinostomatid flukes, E. malayanum and E. ilocanum, are commonly found in lowlands or irrigated rice fields. This could be related to B. indica and B. savilei (lowland or agricultural rodents) infected with these worms, whereas L. edwardsi was not. This result is similar to that from the study in Cambodia.21 In addition, B. indica also was infected with A. cantonensis, in which its intermediate hosts is also gastropod.55,56 Angiostrongylus cantonensis had been reported in B. indica from the previous study.57

This is the first report of zoonotic helminths in L. edwardsi and the first demonstration of A. cantonensis in B. indica; H. diminuta, H. nana, E. malayanum, and E. ilocanum in B. indica; and B. savilei in Lao PDR. Bandicota indica and B. savilei are now major pests in agricultural rice fields, and L. edwardsi is a forest rodent and can be found in disturbed habitats close to forested areas. Our result showed the potential of reservoir hosts of these three rodents and a high prevalence of zoonotic helminths in this study area. Therefore, the ongoing control efforts by the National Helminth Control Program in Lao PDR or even the leader of the community, in terms of education and hygiene, are needed to prevent the transmission of zoonoses in this area.