Magnetic resonance imaging (MRI) for the detection and localization of the cystic lesion. (A) T2, (B) T1-weighted contrast enhanced, (C) susceptibility-weighted, and (D) diffusion-weighted images from an MRI brain show a cystic mass (8 mm), located peripherally in the right occipital lobe with surrounding vasogenic edema. The cyst had an enhancing T2 hypointense wall. Best appreciated on the T2 and susceptibility-weighted image sequences is a punctate low-signal focus within the cyst (arrow). The lack of diffusion restriction of the fluid contents is not consistent with a pyogenic abscess. The morphology was typical of neurocysticercosis in the colloidal vesicular phase,16 and the internal punctate focus represents the parasite scolex.

Phylogenetic relationship of sequences in the mitochondrial gene cytochrome c oxidase subunit 1 (cox-1; 446 bp). The sequence derived from DNA from the cranial cyst of the present patient from Australia (bold-type) and other reference sequences from selected Taenia taxa were subjected to analysis using the neighbor-joining distance tree building method. Individual GenBank accession numbers precede species names. Bootstrap values (based on 2,000 iterations) are located next to supported branches. Taenia laticollis (from lynx) was selected as the outgroup. The scale bar indicates the number of nucleotide substitutions per site. 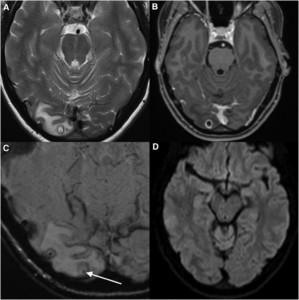 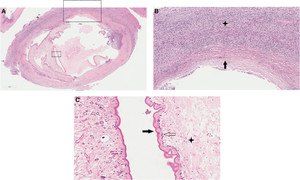 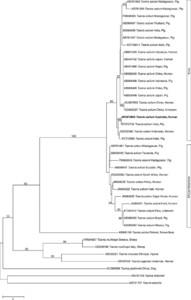 Neurocysticercosis (NCC) is a disease caused by infection of the central nervous system with the larval stage of the tapeworm Taenia solium. This disease is endemic in many parts of the world, including Africa, Asia, and Latin America, where animal husbandry practices are common such that pigs reared for human consumption ingest feces from humans infected with T. solium. Neurocysticercosis is rarely acquired in economically affluent regions, including North America, Central Europe, Japan, and Australasia, and in countries where pork consumption is discouraged by religious or social practices. In these countries, NCC is usually diagnosed in immigrants or returning travelers who have spent time in endemic regions. Here, we report a case of NCC in a 25-year-old woman presenting with worsening visual symptoms in association with headache, diagnosed previously as a migraine with visual aura. This person had always lived in Australia and had never traveled overseas to a country endemic for T. solium. The unusual features of the clinical presentation and epidemiology are highlighted to raise physicians’ awareness that attention needs to be paid to the risk of autochthonous infection occurring in non-endemic countries.

A 25-year-old woman was referred to an Australian teaching hospital for further investigation and management of a solitary occipital brain lesion detected following magnetic resonance imaging (MRI). This imaging showed a rim-enhancing lesion (8 mm) with surrounding vasogenic edema. An abscess and neoplasm were initially considered the most likely differential diagnoses.

From 18 years of age, the patient had experienced intermittent headaches associated with transient visual symptoms, diagnosed as migraines with visual aura. Episodes were usually of short duration, occurring twice or thrice monthly and resolved with paracetamol/metoclopramide (500 mg/5 mg) treatment. Her latest episode did not resolve as usual, and a mild to moderate headache persisted for 6–7 days. Visual symptoms were more severe, consisting of episodic blurring of central vision. No nausea, vomiting, fever, sweats, motor, or additional sensory disturbances were reported. No other significant past medical history was elicited. The only regular medication was an oral contraceptive pill (levonorgestrel 150 mg/ethinyloestradiol 30 mg daily).

Born in Australia, this patient had never traveled overseas, and she lived with her parents and siblings in an outer metropolitan suburb of Melbourne. She worked as a barista in a local café, had never smoked or used illicit drugs, and had no exposure to animals other than pet dogs and cats.

On initial clinical assessment, she was a young female who appeared well, with a temperature of 36.4°C, a blood pressure of 125/64 mmHg, a pulse rate of 66/minute, a respiratory rate of 16/minute, and an oxygen saturation of 98% via pulse oximetry. Neurological examination (visual acuity and visual fields) was normal.

The patient was treated twice daily with dexamethasone (4 mg) for cerebral edema and with levetiracetam (500 mg) for seizure prophylaxis. An MRI of the brain was repeated in preparation for diagnostic surgical excision (Figure 1).

A stereotactic craniotomy was performed and an encapsulated lesion removed from the right occipital lobe without complication. Unexpectedly, the lesion had the macroscopic appearance of a cyst that, when transected, was not human tissue. Histopathological examination indicated that this cyst was consistent with that of a taeniid cestode (Figure 2). Although no specific anti–Taenia solium IgG antibody was detected by serological testing using the AccuDiag™ cysticercosis ELISA kit (Diagnostic Automation Inc., Woodland Hills, CA), and no taeniid cestode eggs were detected on coproscopy, PCR-based sequencing of genomic DNA extracted from cyst material from a formalin-fixed paraffin-embedded histology tissue block using the DEXPAT kit (TAKARA Bio, Shiga, Japan) enabled the definitive diagnosis of neurocysticercosis (NCC). This genetic analysis was undertaken by PCR-based sequencing of part of the mitochondrial gene cytochrome c oxidase subunit 1 (pcox1) using an established method with primers JB3 (5′-TTTTTTGGGCATCCTGAGGTTTAT-3′) and JB4.5 (5′-TAAAGAAAGAACATAATGAAAATG-3′).1,2 The pcox1 sequence obtained from the amplicon matched several sequences representing T. solium and other Taenia species from the GenBank database. A phylogenetic analysis of these cox1 sequences using the neighbor-joining distance method in MEGA v.10.1.6.3 (Figure 3) revealed that the pcox1 sequence derived from DNA of the cyst from the patient clustered, with strong nodal support, with Asian but not African/American genotypes of T. solium. Because this case involved a solitary lesion that was surgically removed, no further treatment was recommended.

Neurocysticercosis is caused by infection with the larval stage (cysticercus) of T. solium. The life cycle of this parasite requires humans as the definitive host and pigs as the intermediate host. Neurocysticercosis occurs when a human becomes an intermediate host following the inadvertent ingestion of eggs originating from a human T. solium carrier. Similar to infection in pigs, larvae emerge from eggs (oncospheres), migrate from the gut, and are transported via the blood stream to organs where they develop to cysts (cysticerci), predominantly in muscles and the central nervous system.

Taenia solium is not endemic to Australia, and indeed, this is the first recorded autochthonous case of NCC in Australia. Australian cases reported have either been in immigrants4–6 or returning residents, who have traveled to endemic regions.4,7 Autochthonous cases have been recorded in other non-endemic regions of the world, including a frequently referenced report in an orthodox Jewish community in New York City8 and also in Middle Eastern countries, where pork consumption is forbidden for religious reasons.9,10 Sometimes, a clear epidemiological link can be established based on evidence of close contact with people originating from geographic areas of high endemicity, who may be employed in the households of those who would otherwise not be at risk.8,9,11 Such a link could not be made in the present case. The patient’s family had neither accommodated guests or domestic workers from endemic regions nor did the patient report previous or current close contact with people from areas of known endemicity.

The patient’s work as a barista did entail ongoing casual contact with people from a variety of geographical regions, but this was not distinguishable from countless other young Australians employed in the hospitality industry. However, it is not surprising that with the high frequency and ease of travel between endemic and non-endemic regions, sporadic infection can occur in people, who would otherwise be considered at no or very low risk of infection with T. solium. Although a clear source of infection was not established here, it is proposed that the patient had inadvertently ingested eggs of T. solium released from a tapeworm carrier who had traveled to, or originated from, an endemic country. In this context, it is relevant to indicate that within the patient’s suburb of residence, the second most common country of birth after Australia is India at 5.9%, and > 10% of residents were born in Asia.12

Here, a definitive diagnosis was made by direct sequence analysis of PCR-amplified DNA from the cyst lesion. The negative serological test result was not surprising, given previous observations of seropositivity in only 25–30% of cases with solitary brain lesions.13 Sensitivity of serology increases above 90% with two or more lesions13 and is supportive of diagnosis without being sufficient, as it indicates exposure only.14 The diagnosis is dependent on clinical suspicion and characteristic radiological findings but may be made definitively based on surgical specimens through microscopic features and/or molecular testing. Recently, published guidelines for diagnosis and treatment of NCC have the promise of standardizing the management of this disease.15

Although this case is the first documented of Australian locally acquired NCC, it is possible that more cases could ensue. Clinicians need to be mindful that with the ease and frequency of world travel, diseases such as NCC that are highly endemic in many parts of the world pose a risk to inhabitants of countries with low endemicity.