Percentages of households reporting indoor residual insecticide spraying, by year 2003–2013. *In 2008 and 2009, spraying commenced after malaria cases were reported. 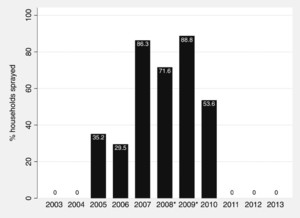 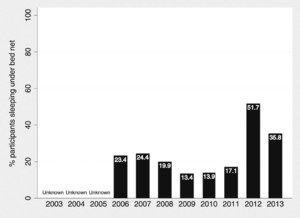 In epidemic-prone areas of the western highlands, the Kenya Ministry of Health conducted campaigns of indoor residual spraying (IRS) of households, followed by mass distribution of insecticide-treated bed nets (ITNs), as part of the National Malaria Strategy. We previously reported that in the highland areas of Kipsamoite and Kapsisiywa, widespread IRS coverage in 2007, after lower but substantial coverage in 2005 and 2006, contributed to possible local interruption of malaria transmission between 2007 and 2008. Indoor residual spraying campaigns in the area ended in 2010, succeeded by a mass ITN distribution campaign in 2011 and 2012 targeting universal coverage. Insecticide-treated bed net use in the area increased from 17.1% pre-campaign in 2011 to 51.7% post-campaign in 2012, but decreased to 35.8% in 2013. The ITN campaign did not reduce malaria incidence in the population as a whole (odds ratio [OR] after ITN distribution versus before, 1.29, 95% CI: 1.00–1.66, P = 0.049). However, in 2011–2013, individuals who stated that they slept under ITNs as compared with those who did not had a decrease in malaria incidence that approached statistical significance (OR 0.74, 95% CI: 0.52–1.04, P = 0.08). Mass ITN distribution after previous annual IRS campaigns was insufficient to further reduce malaria transmission in this area of low and highly seasonal transmission possibly because of low ITN use despite the mass campaign.