Distribution of financing of costs of all and nonfatal dengue cases in 2017 US$. JKN = Jaminan Kesehatan Nasional.

Comparative adjusted dengue cost per episode (in 2017 US$) by region, and data source in hospitalized (A) and ambulatory (B) settings. Note: Originally published costs were adjusted based on the gross national income (GNI) per capita for the original study setting and year, compared with the GNI per capita for Indonesia for 2017, in US$ at market prices. For details, see Supplemental Appendix 1. Sources: Breakdown by region1 and Indonesia (this study and Nadjib et al.27). Averages for Nadjib et al.27 were derived as arithmetic averages of the site-specific values reported by the original authors. 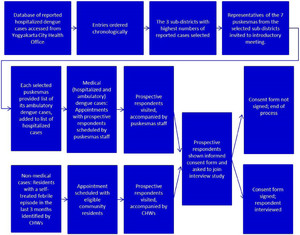 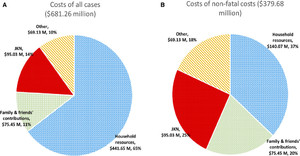 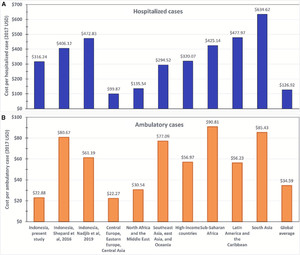 Cost of Dengue Illness in Indonesia across Hospital, Ambulatory, and not Medically Attended Settings

Informed decisions concerning emerging technologies against dengue require knowledge about the disease’s economic cost and each stakeholder’s potential benefits from better control. To generate such data for Indonesia, we reviewed recent literature, analyzed expenditure and utilization data from two hospitals and two primary care facilities in Yogyakarta city, and interviewed 67 dengue patients from hospital, ambulatory, and not medically attended settings. We derived the cost of a dengue episode by outcome, setting, and the breakdown by payer. We then calculated aggregate Yogyakarta and national costs and 95% uncertainty intervals (95% UIs). Dengue costs per nonfatal case in hospital, ambulatory, not medically attended, and overall average settings were US$316.24 (95% UI: $242.30–$390.18), US$22.45 (95% UI: $14.12–$30.77), US$7.48 (95% UI: $2.36–$12.60), and US$50.41 (95% UI: $35.75–$65.07), respectively. Costs of nonfatal episodes were borne by the patient’s household (37%), social contributors (relatives and friends, 20%), national health insurance (25%), and other sources (government, charity, and private insurance, 18%). After including fatal cases, the average cost per episode became $90.41 (95% UI: $72.79–$112.35). Indonesia had an estimated 7.535 (95% UI: 1.319–16.513) million dengue episodes in 2017, giving national aggregate costs of $681.26 (95% UI: $232.28–$2,371.56) million. Unlike most previous research that examined only the formal medical sector, this study included the estimated 63% of national dengue episodes that were not medically attended. Also, this study used actual costs, rather than charges, which generally understate dengue’s economic burden in public facilities. Overall, this study found that Indonesia’s aggregate cost of dengue was 73% higher than previously estimated, strengthening the need for effective control.