Data used in the simulation model. (A) averages of 2013–2017 environmental data. (B) worm emergence from 2014 to 2017 used for initialization and parameter calibration.

Simulation represents dogs, worms, and a single water source. Because dogs interact with the water source, they acquire infection with some probability (A), and dogs with emerging worms increase the infectivity of the water source (B).

Simulated number of worms emerging from dogs for years 2014–2017, calibrated with each of the (fixed) environmental factor scenarios. Error bars indicate 95% simulated intervals at each peak. (Simulated number of dogs with emerging worms is given in Supplemental Appendix Section 3.1.)

Comparing the three best-performing calibrated environmental factors (EFs). Percentages indicate the relative L3 burden in the water per month resulting from EF-S4, which is greatest from April to August, peaking in June.

Box plots for . Horizontal red lines indicate the median numbers of secondary cases across 100 replications, and outliers are marked by red (+). Mean values, that is, , are reported in the table below each month. 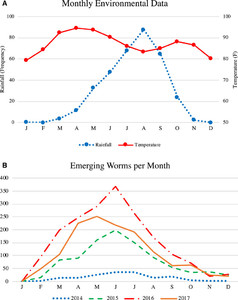 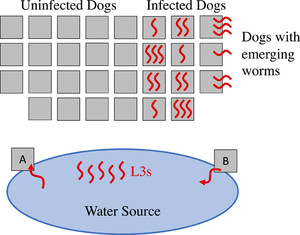 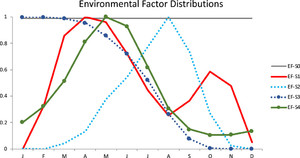 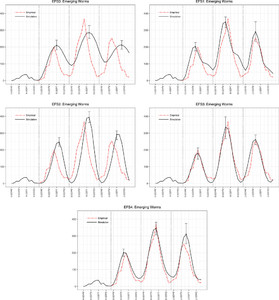 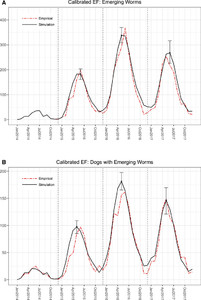 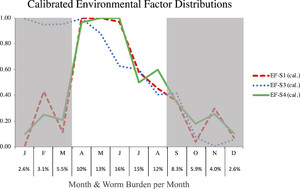 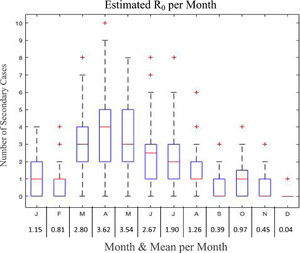 The campaign to eradicate dracunculiasis (Guinea worm [GW] disease) and its causative pathogen Dracunculus medinensis (GW) in Chad is challenged by infections in domestic dogs, which far outnumber the dwindling number of human infections. We present an agent-based simulation that models transmission of GW between a shared water source and a large population of dogs. The simulation incorporates various potential factors driving the infections including external factors and two currently used interventions, namely, tethering and larvicide water treatments. By defining and estimating infectivity parameters and seasonality factors, we test the simulation model on scenarios where seasonal patterns of dog infections could be driven by the parasite’s life cycle alone or with environmental factors (e.g., temperature and rainfall) that could also affect human or dog behaviors (e.g., fishing versus farming seasons). We show that the best-fitting model includes external factors in addition to the pathogen’s life cycle. From the simulation, we estimate that the basic reproductive number, R0, is approximately 2.0; our results also show that an infected dog can transmit the infection to 3.6 other dogs, on average, during the month of peak infectivity (April). The simulation results shed light on the transmission dynamics of GWs to dogs and lay the groundwork for reducing the number of infections and eventually interrupting transmission of GW.