Prevalence of antibody seropositivity (A) and strength of antibody response in those positive (B) using a panel of Plasmodium antigens for Asian migrants to Angola, 2019. MFI-bg: mean fluorescence intensity-background.

Seropositivity to any Plasmodium falciparum antigen vs. time spent in Angola in Asian migrants sampled in Angola, 2019. 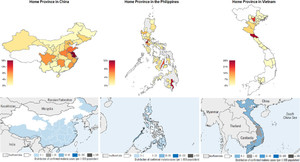 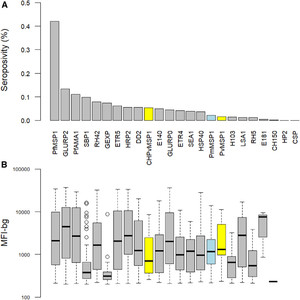 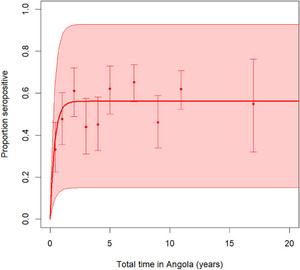 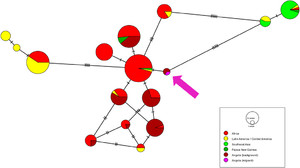 Malaria Risk and Prevention in Asian Migrants to Angola

The number of Asian migrants working in sub-Saharan developing countries like Angola has been increasing. Their malaria risk, prevention, and care-seeking practices have not been characterized. A cross-sectional survey was conducted in 733 Chinese and Southeast Asian migrants in Angola. Respondents were interviewed and provided blood samples. Samples were analyzed to detect Plasmodium antigen and characterize host anti-Plasmodium response. Positive samples were genotyped using the pfs47 marker. Most respondents (72%; 95% CI: 68–75) reported using bed nets, but less than 1% reported using chemoprophylaxis. Depending on the assay, 1–4% of respondents had evidence of active malaria infection. By contrast, 55% (95% CI: 52–59) were seropositive for Plasmodium antibodies. Most infections were Plasmodium falciparum, but infection and/or exposure to Plasmodium vivax and Plasmodium malariae was also detected. Seroprevalence by time in Angola showed most exposure occurred locally. One respondent had sufficiently high parasitemia for pfs47 genotyping, which showed that the infection was likely locally acquired despite recent travel to home country. Asian migrants to Angola are at substantial risk of malaria. Employers should consider enhanced malaria prevention programs, including chemoprophylaxis; embassies should encourage prevention practices. Angolan healthcare workers should be aware of high malaria exposure in Asian migrants.