Course of ALT over time in Plasmodium vivax–induced blood-stage malaria. Changes in ALT levels over time for all 32 subjects. Each of the 32 subjects are represented by a single trace. Day 0 represents the day of inoculation (arrow). Those subjects represented by dotted lines were from chloroquine cohort C1 (n = 8), and all were treated 8 days post-inoculation. The dashed line represents subject C13 (R013) from chloroquine cohort C2 who was the only subject treated on day 9 post–inoculation. The ULN for ALT in male subjects (40 IU/L) has been included for reference (dashed horizontal line). ALT = alanine transaminase; ULN = upper limit of normal.

Phase IIA artefenomel study: course of ALT levels. Changes in ALT levels (U/L) over time for all 41 subjects. Day 1 represents the day 0 pre-treatment value and day 0 represents the first ALT value post-treatment. Data are displayed in this way to ease the graphical representation of the data. For ease of interpretation subjects, 2–19 and 1–22 are represented by dotted and dashed lines, respectively. The ULN for ALT in male and female subjects (40 IU/L) from the assay used in the study has been included for reference. ALT = alanine transaminase; ULN = upper limit of normal.

Malaysia studies: course of ALT levels. Day 0 (pre-treatment) and day 7 ALT results for all subjects segregated into those who had an increase in ALT and those who did not. ALT= alanine transaminase. 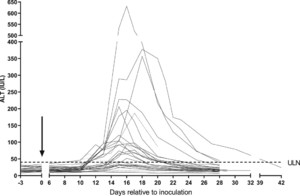 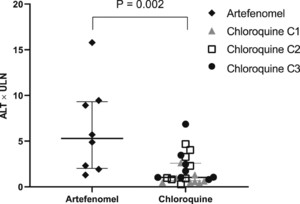 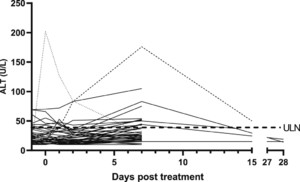 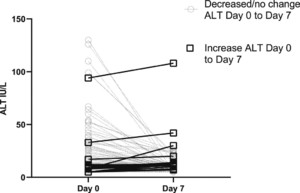 Liver transaminase elevations after treatment in malaria volunteer infection studies (VISs) have raised safety concerns. We investigated transaminase elevations from two human Plasmodium vivax VISs where subjects were treated with chloroquine (n = 24) or artefenomel (n = 8) and compared them with studies in Thailand (n = 41) and Malaysia (n = 76). In the VISs, alanine transaminase (ALT) increased to ≥ 2.5 × upper limit of normal (ULN) in 11/32 (34%) volunteers, peaking 5–8 days post-treatment. Transaminase elevations were asymptomatic, were not associated with elevated bilirubin, and resolved by day 42. The risk of an ALT ≥ 2.5 × ULN increased more than 4-fold (odds ratio [OR] 4.28; 95% CI: 1.26–14.59; P = 0.02) for every log10 increase in the parasite clearance burden (PCB), defined as the log-fold reduction in parasitemia 24 hours post-treatment. Although an elevated ALT ≥ 2.5 × ULN was more common after artefenomel than after chloroquine (5/8 [63%] versus 6/24 [25%]; OR 5.0; 95% CI: 0.91–27.47; P = 0.06), this risk disappeared when corrected for PCB. Peak ALT also correlated with peak C-reactive protein (R = 0.44; P = 0.012). Elevations in ALT (≥ 2.5 × ULN) were less common in malaria-endemic settings, occurring in 1/41 (2.5%) Thai patients treated with artefenomel, and in none of 76 Malaysians treated with chloroquine or artemisinin combination therapy. Post-treatment transaminase elevations are common in experimental P. vivax infection but do not appear to impact on participant safety. Although the mechanism of these changes remains uncertain, host inflammatory response to parasite clearance may be contributory.