Prevalence of M. tuberculosis infection in Bohol Province, The Philippines. 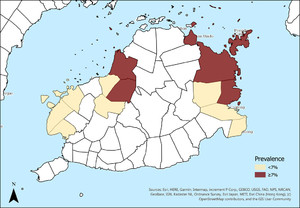 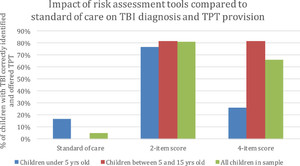 Design and Evaluation of Risk Assessment Tools to Identify Pediatric Tuberculosis Infection in Bohol, the Philippines, a Low–HIV- and High–TB-Burden Setting

Identifying children with, or at substantial risk of, Mycobacterium tuberculosis infection (TBI) and providing TB preventive therapy (TPT) represent an important, yet challenging, strategy in curbing the global burden of childhood TB. Risk assessment scoring tools, which quantify risks associated with unique factors characterizing an individual, could act as a surrogate measure of TBI risk and guide effective and efficient TPT delivery. We assessed important risk factors of childhood TBI and created risk assessment tools through secondary analysis of data from a large, community-based childhood TB prevalence study in the island province of Bohol in the Philippines, a low–HIV- and high–TB-burden, post-disaster setting. We identified four factors that were statistically associated with acquiring TBI—being 5 years or older, having a known TB contact, having a known TB contact who was either the mother or another primary caregiver, and living in a high–TB-burden municipality. We created 2-item, 4-item, and 9-item scores intended to identify child TBI in this low-resource, low–HIV-, and high–TB-burden setting. In addition to the design, evaluation, and impact analysis of these generalizable and valuable risk assessment tools, our study findings emphasize the necessity of targeting both household and community-associated transmissions of childhood TBI to achieve the global goal to end TB.