Timeline for the initial major responses to the COVID-19 pandemic in eight Latin American countries, by country. 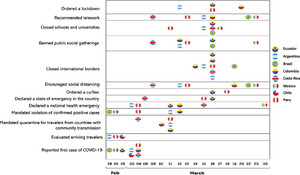 Effective management of a pandemic due to a respiratory virus requires public health capacity for a coordinated response for mandatory restrictions, large-scale testing to identify infected individuals, capacity to isolate infected cases and track and test contacts, and health services for those infected who require hospitalization. Because of contextual and socioeconomic factors, it has been hard for Latin America to confront this epidemic. In this article, we discuss the context and the initial responses of eight selected Latin American countries, including similarities and differences in public health, economic, and fiscal measures, and provide reflections on what worked and what did not work and what to expect moving forward.