Prevalence of Plasmodium falciparum in 2- to 14-year-old children and historical vector control interventions on Bioko Island. With a combination of indoor residual spraying with insecticides, coverage with long-lasting insecticide-treated nets (LLINs), and improved case management, malaria prevalence measured by the same rapid diagnostic test declined from 45% in 2004 to 13.7% in 2012 but only to 16.6% in 2019. The implementation has been supported by a growing database composed of a mapping system that helps identify households that will be sprayed and/or receive LLINs. ANC = antenatal care program.

Proposed pathway to the elimination of Plasmodium falciparum malaria on Bioko Island. 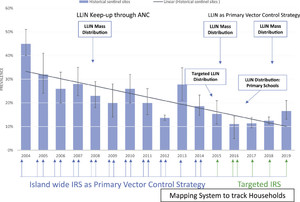 The Equatoguinean Malaria Vaccine Initiative: From the Launching of a Clinical Research Platform to Malaria Elimination Planning in Central West Africa

Fifteen years of investment in malaria control on Bioko Island, Equatorial Guinea (EG), dramatically reduced malaria-associated morbidity and mortality, but the impact has plateaued. To progress toward elimination, EG is investing in the development of a malaria vaccine. We assessed the unique public–private partnership that has had such a significant impact on malaria on Bioko Island and now added a major effort on malaria vaccine development. As part of a $79M commitment, the EG government (75%) and three American energy companies (25%) have invested since 2012 greater than $55M in the Equatoguinean Malaria Vaccine Initiative (EGMVI) to support clinical development of Sanaria® PfSPZ vaccines (Sanaria Inc., Rockville, MD). In turn, the vaccine development program is building human capital and physical capacity. The EGMVI established regulatory and ethical oversight to ensure compliance with the International Conference on Harmonization and Good Clinical Practices for the first importation of investigational product, ethical approval, and conduct of a clinical trial in Equatoguinean history. The EGMVI has completed three vaccine trials in EG, two vaccine trials in Tanzania, and a malaria incidence study, and initiated preparations for a 2,100-volunteer clinical trial. Personnel are training for advanced degrees abroad and have been trained in Good Clinical Practices and protocol-specific methods. A new facility has established the foundation for a national research institute. Biomedical research and development within this visionary, ambitious public–private partnership is fostering major improvements in EG. The EGMVI plans to use a PfSPZ Vaccine alongside standard malaria control interventions to eliminate Pf malaria from Bioko, becoming a potential model for elimination campaigns elsewhere.