Colonoscopic images showing evidence of colitis. Colonoscopy was performed during admission of the patient.

Near-normal colonoscopic appearance of the patient 6 weeks after discharge. The resolution of colitis coincided with the clinical remission of the patient. 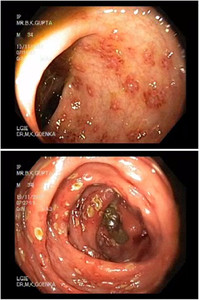 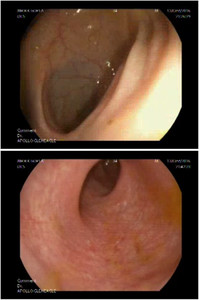 Symptomatic Colitis in a Patient with Dengue Fever: A Case Report

Dengue, a challenging arboviral disease1 prevalent in the tropics, is very rarely known to present with acute colitis, with our literature search showing only two such cases2,3 reported worldwide so far. Although upper gastrointestinal involvement in dengue fever is reported more frequently, including upper GI bleeding with endoscopic evidence of the same,4,5 colonic involvement and colonoscopy-proven colitis are very rare. Here, we describe the case of a patient with dengue fever who presented with acute colitis and hematochezia and was treated by our department.

The colonoscopic impression and histopathologic findings strongly pointed toward infective colitis. Nevertheless, possible differentials including inflammatory bowel disease, vasculitis, and bacterial infection were considered. Fecal calprotectin was negative (not in favor of IBD); there was no rash, mucosal involvement, typical pattern of arthropathy, and negative antinuclear antibody (not in favor of vasculitis), and no antibacterial therapy was required for remission (not in favor of bacterial colitis). Moreover, the temporal relation between the onset of fever and colitis with concurrent dengue IgM positivity and the resolution of colitis following the resolution of dengue fever also fortified dengue colitis as the primary clinical diagnosis. No specific treatment was given for the colitis between discharge and the follow-up colonoscopy at 4 weeks, as it was a colitis of suspected viral etiology.

Our case illustrates an interesting and rare presentation of dengue fever where the patient had satisfactory clinical outcomes and colitis showed resolution with dengue remission.