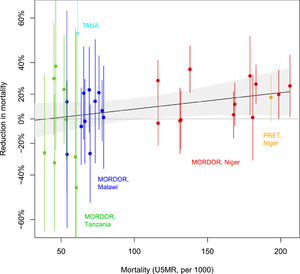 Small trials of mass azithromycin distribution for trachoma control suggested that mass azithromycin may reduce postneonatal childhood mortality.1–3 In the original primary analyses, the Trachoma Amelioration in northern Amhara (TANA) study demonstrated an odds ratio of 0.51 for mortality in the azithromycin treatment group (95% CI: 0.29–0.90), for an overall reduction in child mortality in communities receiving azithromycin compared with delayed azithromycin. In the Niger component of the Partnership for the Rapid Elimination of Trachoma (PRET) study, biannual treatment of children led to a mortality rate ratio of 0.81 (95% CI: 0.66–1.0), an overall reduction in child mortality compared with annual treatment of the entire community. This finding was confirmed in the Macrolides Oraux pour Réduire les Décès avec un Oeil sur la Résistance (MORDOR) study, a larger three-country study that demonstrated a 13.5% (95% CI: 6.7–19.8%) reduction in mortality with biannual distributions4 in children aged 1–59 months.

Overtreatment with antibiotics has clear downsides. Distribution of azithromycin for trachoma control has been shown to select for macrolide resistance in some organisms.5–8 However, identifying areas which maximize the efficacy of azithromycin for prevention of child mortality could aid in limiting distributions to regions where it may be most effective, and thus limit antibiotic consumption. In both subgroup analyses of MORDOR and the pooled analysis,9 effects appeared to be larger in areas with higher mortality. However, as childhood mortality is a statistically rare event even in high-burden settings, these analyses were not designed to provide evidence of a statistically significant relationship between mortality rate and efficacy of azithromycin distribution. Here, we assess the dependence of the efficacy of mass azithromycin distributions on the underlying childhood mortality rate in three trials that have evaluated azithromycin for the prevention of child mortality.1,2,4

Communities were followed for 12 months. A door-to-door census was conducted in all communities, and all-cause mortality as per the census was a prespecified primary outcome. Children younger than 12 months were not treated in TANA, and thus were excluded from analysis. For this analysis, we included only children aged 1–5 years.

Partnership for the Rapid Elimination of Trachoma.2

For the three MORDOR study sites, communities were aggregated into zones. We divided the range of longitude and latitude for each country into equal segments, resulting in an r × c grid which defines a zone. If fewer than 10 communities were assigned to a given grid square, that grid square was merged with the neighboring square with the fewest number of communities (randomly breaking ties). We chose a finer resolution for countries with a larger number of deaths (4 × 4 for Tanzania, 4 × 5 for Malawi, and 5 × 5 for Niger), which resulted in 10 zones for each country (after merging as needed). In sensitivity analyses, we examined all combinations of 4, 5, and 6 latitude and longitude grid divisions for each country (729 possible grids in total), conducting four replications for each. The smaller TANA and PRET studies were not subdivided.

We tested the association between mortality reduction (comparing azithromycin and placebo communities) and baseline mortality as follows. For each zone, we estimated the log relative mortality rate and the average mortality rate in both azithromycin and placebo communities. Because some zones could contain zero deaths, we used the shrinkage estimator , where Ti is the person-time at risk in treatment group i and ni is the number of deaths in group i. Asymptotic errors of the mortality rate ratio were computed.13 We modeled the treatment effect by zone using linear mixed effects regression, with the average mortality rate per zone as a fixed effect regressor. We used country, and when necessary study, as a random effect, and weighted each observation by the inverse of the estimated variance of the mortality rate ratio. Analyses were conducted in R (v. 3.5 for Macintosh, R Foundation for Statistical Computing, Vienna, Austria).

Figure 1 shows the effect sizes as a function of baseline mortality. We found no convincing evidence that the baseline mortality rate modified the effect of azithromycin on mortality (P = 0.12). This finding was unchanged when controlling for the mean age of the enrolled children in each zone (P = 0.11). We also found modest evidence of a difference when we restricted to the three MORDOR sites (P = 0.039) combined (although not compelling, given multiple comparisons correction). We found no evidence of a difference when we restricted to Niger alone (P = 0.34). In an analysis restricted only to children younger than 1 year in MORDOR, there was no evidence of effect modification by the baseline mortality rate (P = 0.60). When restricting to children aged 2–4 years, we find P = 0.018.

Similar findings were obtained for other choices of geographic zones. Using a 4 × 4 grid for all countries yielded an overall nonsignificant P-value of 0.078, whereas a 5 × 5 grid yielded P = 0.16. Examining all 729 possible combinations of grid sizes of four, five, or six divisions per axis (longitude or latitude) for the three countries, only 24.7% of these analyses yielded significance at the 0.05 level.

In this analysis, we found no compelling evidence that the underlying mortality rate modified the effect of azithromycin on child mortality, although a modest effect is not inconsistent with our findings. We note, however, that although the MORDOR trial was not powered for detection of effect modification, the findings we reported previously showed stronger evidence when restricted to MORDOR sites alone. The findings of the trial exhibited considerable apparent heterogeneity in efficacy by country,4 but in the reported prespecified secondary analysis, country did not modify the effect of treatment within MORDOR. An alternative analysis of the MORDOR results which included data from other sources found broadly similar findings.14 Our procedure is similar to that of the Bland–Altman analysis, based on modeling the difference in mortality as a function of the mean (by zone), athough modest bias may remain.

In a broad sense, areas with higher overall mortality may have a larger proportion because of infectious causes. We might expect no discernable benefit to mass azithromycin distribution in areas of the developed world where infectious disease causes a smaller portion of childhood deaths. Our findings cannot precisely estimate the threshold at which mortality benefits become negligible, and do not imply a lack of benefit for communities at the lower end of the range observed here.

Higher mortality areas clearly have the most to gain in terms of absolute number of deaths averted, even if the relative efficacy of azithromycin was similar across mortality rates. Our findings support prioritization of high childhood mortality regions, without precluding efforts in regions with relatively lower childhood mortality.