Bite cases and health facilities in urban and peri-urban localities of Arequipa City, Peru. Coordinates of cases have been jittered to protect confidentiality. 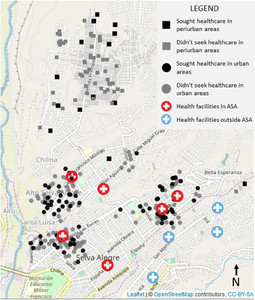 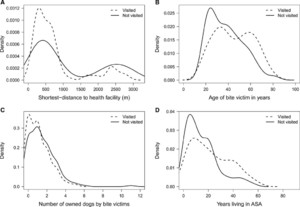 Since its reintroduction in 2015, rabies has been established as an enzootic disease among the dog population of Arequipa, Peru. Given the unknown rate of dog bites, the risk of human rabies transmission is concerning. Our objective was to estimate the rate of dog bites in the city and to identify factors associated with seeking health care in a medical facility for wound care and rabies prevention follow-up. To this end, we conducted a door-to-door survey with 4,370 adults in 21 urban and 21 peri-urban communities. We then analyzed associations between seeking health care following dog bites and various socioeconomic factors, stratifying by urban and peri-urban localities. We found a high annual rate of dog bites in peri-urban communities (12.4%), which was 2.6 times higher than that in urban areas (4.8%). Among those who were bitten, the percentage of people who sought medical treatment was almost twice as high in urban areas (39.1%) as in peri-urban areas (21.4%).