Timeline for elimination of onchocerciasis in the Wambabya–Rwamarongo focus.

Map of Uganda onchocerciasis foci showing the location of the Wambabya–Rwamarongo focus.

Number of persons treated with ivermectin from 1996 to 2013. 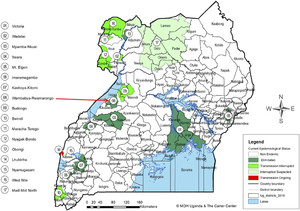 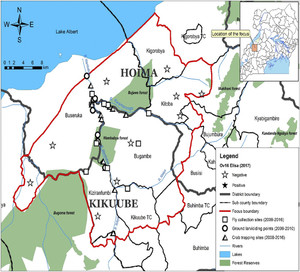 Wambabya–Rwamarongo onchocerciasis focus is one of the eight foci Uganda verified using the WHO verification guidelines. The approach for elimination was twice yearly treatment with ivermectin for every round, treating at least 90% of all the eligible population. This was in combination with vector elimination using Abate® (BASF SE, Limburgerhof, Germany) since elimination nationwide policy was launched. From 2008 to 2013, the program distributed ivermectin with a mean treatment coverage of the ultimate treatment goal (UTG) or eligible population of 91.2%, with a range of 85–96%. In 2009, vector elimination based on ground larviciding had a dramatic impact on the Simulium vectors, as the last fly was observed in October 2009. No more Simulium vectors were observed during a period of at least 7 years, including the 3-year posttreatment surveillance (PTS) until the focus was reclassified as eliminated in August 2017. During the PTS period, none of the 10,578 trapped crabs were found infested with the aquatic stages of the vector. The last infested crab was observed in March 2010, and for at least 7 years, no infested crabs were observed. Serological surveys showed that of 2,978 young children examined in 2013, only one was OV16 positive (0.0%; 95% CI: 0–0.21). In 2017, after the PTS period, all 3,079 young children examined were negative for OV16 (95% CI: 0–0.16). Therefore, entomological and serological results provided evidence that resulted in the reclassification of Wambabya–Rwamarongo focus from “transmission interrupted” to “transmission eliminated” with no possibility of recrudescence.