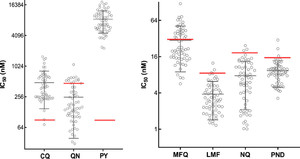 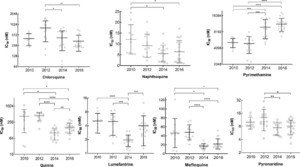 The emergence and spread of resistance in Plasmodium falciparum to the frontline treatment artemisinin-based combination therapies in Southeast Asia require close monitoring of the situation. Here, we collected 36 clinical samples of P. falciparum from the China–Myanmar border in 2014–2016, adapted these parasites to continuous culture, and performed in vitro drug assays on seven antimalarial drugs. Data for 23 parasites collected in 2010 and 2012 from the same area reported in an early study were used to assess longitudinal changes in drug sensitivity. Parasites remained highly resistant to chloroquine (CQ) and pyrimethamine, whereas they were generally sensitive to mefloquine (MFQ), lumefantrine (LMF), naphthoquine (NQ), and pyronaridine (PND). Parasites showed a similar temporal trend in sensitivity to CQ, NQ, and PND, with gradual reduction in the half-maximal inhibitory concentrations (IC50s) after 2012. The IC50s to the aminoalcohol drugs MFQ, LMF, and quinine (QN) all significantly declined in 2014, followed by various degrees of increase in 2016. Pyrimethamine displayed a continuous increase in IC50 over the years. The Dd2-like P. falciparum chloroquine-resistant transporter mutations were fixed or nearly fixed in the parasite population. The P. falciparum multidrug resistance 1 F1226Y mutation was detected in 80% parasites in 2016 and associated with reduced sensitivity to LMF and QN (P < 0.05). The N51I in P. falciparum dihydrofolate reductase and K540E/N and A581G in P. falciparum dihydropteroate synthase that are associated with antifolate resistance were either fixed or were approaching fixation in recent years. This study provides an updated picture and temporal trend of antimalarial drug resistance in the China–Myanmar border region, which will serve as a reference for antimalarial treatment.