The seasonal occurrence of Japanese encephalitis (JE) cases in Sabah is represented by plotting the total number of JE cases for each month during the 19-year period. JE was predominant during June, July, and August, peaking in July.

Yearly distribution of Japanese encephalitis cases in Sabah from 2000 to 2018. 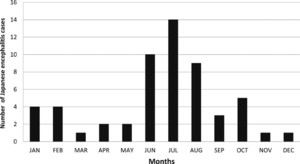 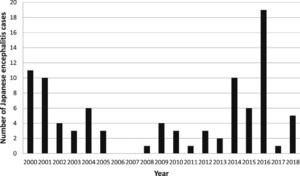 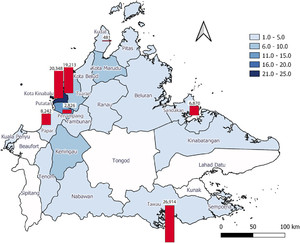 Japanese encephalitis (JE) is endemic in Malaysia. Although JE vaccination is practiced in the neighboring state of Sarawak for a long time, little is known about JE in Sabah state in Borneo. As a result, informed policy formulation for JE in Sabah has not been accomplished. In the present study, we have analyzed JE cases that have been reported to the Sabah State Health Department from 2000 to 2018. A total of 92 JE cases were reported during 19 years, and three-fourths of the cases were attributed to children. The estimated mean incidence for JE cases is 0.161/100,000 population. Japanese encephalitis was predominant in Sabah during June, July, and August, peaking in July. In most cases, pigs were absent within a 400-m radius of the place of residence. We could not establish any relationship between the mapping of JE cases and the number of piggeries in each district. We could not establish a relationship between average rainfall and JE cases, either. We propose the cases reported are possibly showing the tip of an iceberg and continuous surveillance is needed, as JE is a public health challenge in Sabah.

Globally, every year 68,000 cases of encephalitis occur in humans because of the Japanese encephalitis virus (JEV).1 Malaysia is among the 24 countries endemic to JEV transmission.1 All five genotypes of JEV have been detected in Malaysia. As a result, it has been postulated that JEV has originated in the Malaysian/Indonesian region.2 Malaysia is a federation of 13 states and three federal territories, 11 states and two federal territories are in Peninsular Malaysia, and two states (Sarawak and Sabah) and one federal territory are in Borneo. Japanese encephalitis has been well documented in Peninsular Malaysia and Sarawak; however, the distribution of human JE in Sabah is unknown. Whereas the presence of JEV antibodies has been determined in pigs, sheep,3 and even in orangutans4 in Sabah, the seroprevalence of JEV in humans is unknown as it is assumed that Sabah is not endemic for human JE. Possibly because of this, no studies have been conducted on JE in Sabah so far. Therefore, it is challenging to retrieve information on the topic. Although there are vaccines available for JE, currently they are not part of the routine immunization program in Sabah and they are not available in the private healthcare systems. This study aims to generate evidence that will contribute to policy discussions by the relevant authorities on JE control and vaccination. Therefore, the objective of this study was to explore the epidemiology of JE in Sabah based on population surveillance data collected over a 19-year period.

This is a retrospective observational study reviewing all JE cases occurred in Sabah from January 2000 through December 2018, notified to the Vector Borne Disease Control Division, Sabah State Health Department. The study protocol was approved by the Medical Ethics and Research Committee, Ministry of Health, Malaysia. The study protocol was registered under the National Medical Research Registry (NMRR-18-2767-44385).

Definition of epidemiological and clinical variables.

Case definition for JE was determined according to the WHO guidelines.5 All cases were confirmed by anti-JEV IgM detection, and/or by reverse transcription–PCR (RT-PCR) of the serum and/or cerebrospinal fluid. Anti-JEV IgM was detected by JE Detect™ IgM Antibody Capture ELISA (InBios International Inc., Seattle, WA) according to the instructions of the manufacturer. Reverse transcription–PCR was performed according to published methods.6 These tests were performed at the National Public Health Laboratory, Selangor, Malaysia. All cases were categorized into three age-groups, namely, children younger than 15 years, adults aged 15–59 years, and elderly older than 60 years.

QGIS 2.16.2 software (www.qgis.org/en/site) was used to illustrate reported JE cases and pig farms in different districts of Sabah. Data on the piggeries were obtained from the Sabah State Veterinary Department.

Correlation between rainfall and JE cases.

Data were compiled and analyzed using GraphPad. All data were anonymized.

The first cases of JE were confirmed by the Sabah State Health Department in 2000. In subsequent years, several cases were reported. The mean incidence of JE in Sabah is 0.161/100,000 population, which is lower than the global overall incidence of 1.8/100,000 population.1 However, we speculate that there might be more cases of JE in Sabah which go unnoticed because of limited awareness due to lack of information regarding the epidemiology of JE. Because rice cultivation and pig farming are not significant industries in Sabah, sporadic cases may occur without attracting the attention of healthcare professionals, who dismiss it as a significant infectious disease. The present study highlights the fact that people can become infected with JE where pigs are absent, despite the fact that the number of piggeries may not necessarily reflect the pig population. Nevertheless, unless a comprehensive study is carried out, it is difficult to indicate which animal was the amplifier in those cases or whether the pig population in Sabah is sufficient for maintaining JEV transmission. For instance, Culex tritaeniorhynchus, the major vector of JEV, can be carried long distances by winds.7 The Cx. tritaeniorhynchus–pig transmission cycle of JEV was first described in Japan at a time when pigs were intensively farmed and were the most numerous of possible, competent, vertebrate hosts.8 Yet not all regions of Asia experiencing JE outbreaks reflect this scenario. It is important to reconsider the transmission cycle of JEV, taking into account transmission contexts different from those first described in Japan.8 A series of studies showed that pigs play an important role as amplifying hosts for JEV in the neighboring state, Sarawak.9 However, in Singapore, the reservoir of JEV is likely to be aquatic birds because pig farming has been phased out in the early 1980s.10 Sabah has a rich population of aquatic birds; therefore, further study is needed to determine their role in JEV transmission.

Similar to other endemic countries, most of JE cases in Sabah occurred in children younger than 15 years.11 However, the mortality rate we found in Sabah is considerably lower than the usual 20–30% mortality rate.12 In a study performed in the neighboring Sarawak state, the mortality was roughly half of that found in Sabah.12 Comparatively improved levels of facilities, such as diagnostic laboratory, life support system, and specialist doctors, were available for the JE patients in the tertiary care hospital where the study was performed in Sarawak, whereas our patients in Sabah were scattered in hospitals with different levels of facilities. We think that this might influence the mortality rate among patients with JE in Sabah. There was a yearly fluctuation in the number of JE cases in each district of Sabah. Although JE cases were prevalent throughout the year, the highest number of JE cases was identified in June, July, and August, peaking in July. We could not detect any correlation between rainfall in each district and the number of JE cases. In neighboring Sarawak, JE is also prevalent throughout the year, but most cases occurred from November to January,9 when the amount of rainfall is the highest. Sarawak has a similar climate to Sabah, only that the drier or wetter months start 1 or 2 months later. In Sabah, rain can be expected year-round, although, traditionally, the period between October and March is considered rainy and the period from April to September is considered as the dry season. However, rain can vary depending on the mountain and coastal areas and also the effects of other variables, such as the occurrence of typhoons and El Nino. Therefore, a more comprehensive study is needed to determine the effects of rain on the occurrence of JE in Sabah.

A limitation of this study is that neuropsychological adverse effects on the survivors were not documented. In Sarawak, more than half of the patients continued to experience neuropsychological sequelae and behavioral disorders.12 Long-term neurological follow-up of JE patients is needed in Sabah to fully elucidate these complications and to provide more care to people. It might be recommended to introduce a JEV vaccine in Sabah, although the determination of the circulating genotypes is necessary because the current JE vaccine has low protective efficacy against the emerging genotype 5 JEV.13 Therefore, before introducing the JEV vaccine in Sabah, a full-scale study on the seroprevalence and genotype distribution of JEV is needed.

This retrospective study from the notification of the last 19 years revealed that JE is a challenge in Sabah and children are the most vulnerable group affected by this infection, as expected. The number of cases varied yearly and mainly occurred in June, July, and August, peaking in July (which corresponds to the dry season in Sabah). We could not find a relationship between the number of JE cases and the amount of rainfall or the number of pig farms. In a considerable number of cases, no pig farm was in a 400-m radius of the residence. These data indicate that more studies are needed to better understand the full picture of JE in Sabah.