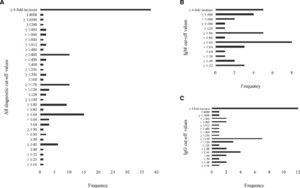 Murine typhus is a neglected but widespread infectious disease that results in acute fever. The immunofluorescence assay (IFA) is the “gold standard” to identify IgM or IgG antibodies, although there is a lack of standardization in methodologies. The objective of this review is to summarize 1) the differences in published methodologies, 2) the diagnostic cutoff titers, and 3) the justification of diagnostic cutoffs. Searches were performed by combining the following search terms: “murine typhus,” “rickettsia typhi,” “immunofluorescence,” “IFA,” and “serologic” with restrictions (i.e., “rickettsia typhi” or “murine typhus,” and “IFA” or “immunofluorescence,” or “serologic*”). The search identified 78 studies that used IFA or immunoperoxidase assay (IIP) antibody cutoffs to diagnose murine typhus, 39 of which were case series. Overall, 45 studies (57.7%) provided little to no rationale as to how the cutoff was derived. Variation was seen locally in the cutoff titers used, but a 4-fold or greater increase was often applied. The cutoffs varied depending on the antibody target. No consensus was observed in establishing a cutoff, or for a single-value diagnostic cutoff. In conclusion, there is a lack of consensus in the establishment of a single-value cutoff. Further studies will need to be executed at each distinct geographic location to identify region-specific cutoffs, while also considering background antibody levels to distinguish between healthy and infected patients.

Murine typhus is a neglected infectious disease caused by Rickettsia typhi, a Gram-negative, obligate intracellular bacterium. Rickettsia typhi is primarily transmitted by Xenopsylla cheopis, the rat flea.1 Commensal rats (most commonly Rattus rattus and Rattus norvegicus) are the natural animal reservoir of the disease. Infection in humans occurs either through inoculation of infected flea feces into bite wounds or by inhalation of aerosolized flea feces.2–4

Given that other febrile illnesses, such as dengue, leptospirosis, and typhoid, have similar clinical manifestations to murine typhus,3,5 laboratory tests are essential to differentiate murine typhus from other causes of undifferentiated fever. Serological methods are commonly used to diagnose murine typhus because of their simplicity and cost-effectiveness.6,7 The indirect immunofluorescence assay (IFA) is considered the “gold standard” and reference technique for diagnosing murine typhus in most research laboratories.1–3,8 Immunofluorescence assay identification of IgM and IgG antibodies provides definitive and accurate evidence of exposure.2,9,10 The immunoperoxidase assay (IIP) is an alternative to IFA and obtains results that have a similar sensitivity and specificity.11

The diagnostic accuracy of IFA is subjective and reliant on methodological and patient factors. Despite being the current reference and standard technique, there is little consensus on the standardization of the IFA methodology. Variable methodological factors include the antigenic strains used and antibody isotype targeted, as well as the diagnostic cutoffs used. Therefore, to guarantee accuracy of diagnosis, standardized methodologies and locally authenticated positivity cutoff limits for diagnostic and epidemiological purposes are required.

This review aims to summarize 1) the differences in published IFA methodologies, 2) the diagnostic cutoff titers used for a positive murine typhus diagnosis, and 3) the justification of these diagnostic cutoffs.

A systematic review was performed. Searches were performed by one author (S. D.) on the PubMed electronic database by combining the following search terms: “murine typhus,” “rickettsia typhi,” “immunofluorescence,” “IFA,” and “serologic” with restrictions (i.e., “rickettsia typhi” or “murine typhus,” and “IFA” or “immunofluorescence,” or “serologic*”). The search was limited to articles that had been published in or could be successfully translated to English, until July 2018. First, the titles and abstracts were screened for applicability. Then, full text of relevant articles were examined to establish eligibility. Diagnostic accuracy studies, case series, and cross-sectional studies using IFA/IIP to diagnose murine typhus were included. We excluded case reports, nonhuman studies, and studies investigating other serological tests (i.e., CF, OX-19, and ELISA). Reference lists of the selected studies were also screened to identify further studies.

Data were extracted by one author (S. D.), and where the information was unclear, a second researcher was consulted (S. D. B.). Details of the location, sample size, study design, reference test, positivity cutoff titer, antibody target, antigenic strain, positivity criteria, and justification for positive cutoff titer were compiled into summary tables. The studies were grouped according to the study design (diagnostic accuracy study, case series, or cross-sectional study) and geographical location. The data were summarized using a narrative synthesis. We did not evaluate intricacies of individual IFA protocols but instead focused on the broader issues such as the methodology used to derive diagnostic cutoffs.

Some studies provided different positivity criteria for IgM and IgG.

Three studies were not included as they examined murine typhus in travelers from various countries.

* If the positivity cutoff titer was only seen once, then it was not included on the table.

† Studies performed on travelers were excluded.

Differentiating by country (Table 3), a single-titer cutoff was the preferred method of diagnosis in Cyprus, Greece, Spain, and Tunisia, whereas in Indonesia, Lao PDR, Sri Lanka, Thailand, and United States, a single-titer cutoff in conjunction with a ≥ 4-fold increase in titers was preferred. Only in Taiwan was a solely ≥ 4-fold increase in titers as a diagnostic cutoff preferred.

To classify confirmed cases and to ensure appropriate patient management, the application of accurate diagnostic cutoffs is necessary for murine typhus. This review has found that there was a major lack of consensus regarding methodologies, application, and IFA/IIP positivity cutoffs used for the diagnosis of murine typhus infections; the reasons for which are manifold and need further investigation and standardization.

In many cases (57.7%, 45/78), a clear justification for the cutoff used was not provided, and it is likely that differences in approach evolved naturally based on local antigenic strains and the pretest odds of disease depending on the local level of murine typhus endemicity. This variation raises questions about which, if any, IFA positivity cutoff is most appropriate for the diagnosis of acute murine typhus infection.

Of the five diagnostic accuracy studies, the majority (60%, 3/5) provided sufficient justification for the positivity cutoff titer used. Although there was a lack of consensus in terms of the source used for the reference test, a single positivity cutoff titer of ≥ 1:400 in Lao PDR and ≥ 1:128 in South America was common (Table 2). This is probably an appropriate estimation for certain parts of Lao PDR and South America, with limited application in other geographic locations. As has been previously established, it is also likely that these cutoffs are not befitting for the locations in which they were being used.41

La Scola et al.6 were most commonly cited as a justification for IFA and IIP diagnostic cutoffs for the diagnosis of R. typhi. The study also suggests that although the IFA is an appropriate diagnostic method in the case of acute infections, it should be “considered a technique for seroepidemiology only in areas where the seroprevalence of the rickettsial disease has already been established.” The article emphasizes that the cutoff should be specific for “each rickettsial disease and each area.”6

Many studies used identical cutoffs for IgG and IgM (26.9%, 21/78), despite the fact that dynamics of the antibody isotypes differ. This should be considered when interpreting test results, as generally on infection, an increase in IgM is seen, followed by increased levels of IgG.41,42

A variety of factors may affect the diagnostic accuracy of IFAs, including the antibody isotype targeted. Differences in IFA single-titer cutoffs were observed in studies where either IgM or IgG were targeted or both IgM and IgG were targeted to apparently increase the accuracy of the test. In general, higher single-titer cutoffs were used for IgG over IgM, whereas no consensus was seen for studies targeting IgM and IgG together (Table 4).

Considering study populations, the use of samples from infected or normal patients and the geographic origin of the patients can influence the consequent diagnostic cutoff. Murine typhus is an important travel-related illness,7 and in a few studies, serum samples were collected from various geographic locations, such as Peru, Russia, United States, and Somalia, although there was ambiguity with regard to whether the cutoff was applied to a single population or whether the cutoff was calculated through results from all the populations despite dissimilarities in endemicity. This emphasizes the complexity surrounding murine typhus serology and the lack of consensus. From the data shown here, no single antibody titer can accurately be advised as diagnostic unless preexistent studies have been performed to establish seroprevalence levels in the normal population within a location.

Moreover, in addition to the lack of IFA methodology standardization, there was also a lack of consensus in the reference comparator or “gold standard reference assay” to determine murine typhus diagnostic cutoffs. The absence of standardized methods and validated cutoffs has serious implications for seroepidemiological and clinical research, as well as implications for patients and healthcare workers. Although a lower cutoff would result in increased false-positive results, a higher cutoff would result in increased false-negative results, causing cases to go undiagnosed and increasing the possibility of those patients developing severe complications.

This review has numerous limitations. First, it only investigated studies published in or translated to English. Second, a single author performed the article selection and data extraction, although any ambiguous data were reviewed among the authors to limit bias. Third, the number of diagnostic accuracy studies included was limited, and, perhaps, the study design affects the positivity cutoff titer used for IFA testing. Therefore, it is difficult to conclude whether there exists a correlation or causation between study designs and cutoff titers. Fourth, this review did not consider the timing of serum collection and the collection of paired sera in relation to the disease. The timing of sample collection in relation to illness onset is an important factor to consider when analyzing a positive serological result. Last, the IFA protocol was not assessed as a factor. This is essential to consider when analyzing results, as variances in protocol (i.e., the quantity of antigen used and inactivation techniques) can affect the sensitivity and specificity of IFA tests, which in turn can affect the selection of optimal cutoffs. Moreover, this review examined both IFA and IIP tests, and the two protocols were not differentiated in this study.

From this review, we cannot conclude a single standardized cutoff titer for murine typhus; however, there are some clinical aspects that are important to note. In terms of treatment, murine typhus is treatable with doxycycline,43 which is an affordable and safe drug. It is possible to prescribe doxycycline in patients who present with non-malarial febrile illness symptoms; however, it could result in no effect as the patient may be infected with a disease not sensitive to doxycycline. Thus, it is essential to accurately diagnose the disease in patients, for which a validated threshold is needed. In highly endemic areas, there are high backgrounds of murine typhus, which poses a potential for false positivity if the cutoff is set too low.

Further research is required to examine the local levels of background immunity, identify circulating antigenic strains, and assess different IFA testing protocols, to make well-versed decisions regarding a region-specific, standardized IFA methodology and cutoff. The prospective cause of fever studies could be carried out in different geographical localities in urban versus rural areas to validate an optimal region-specific cutoff. Moreover, the timing of serum collection and pairing of sera could be assessed to formulate a criterion to classify confirmed versus probable cases, rather than focus on a single-titer cutoff.