Prevalence of malnutrition (underweight, stunting, and wasting) in the children according to age. 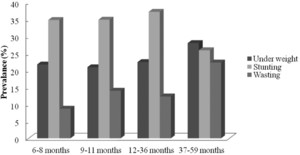 Association of Infant and Child Feeding Index with Undernutrition in Children Aged 6–59 Months: A Cross-Sectional Study in the Maldives

Adequate dietary intake is critically important for child growth and development. This study aimed to analyze the prevalence of undernutrition and its association with infant and child feeding index (ICFI). This cross-sectional study was conducted among children (younger than5 years) and their mothers from Lhaviyani Atoll, Maldives. The data were obtained by interviewing the children’s mothers via pretested questionnaires. Infant and child feeding index scores were calculated from the dietary information. Weight-for-age z-scores (WAZ), length/height-for-age z-scores (LAZ/HAZ), and weight-for-length/height z-scores were calculated from anthropometric data taken according to the WHO criterion. Linear regression tests were used to find the association of nutritional status with ICFI scores. A total of 800 children and their mothers participated in this study. The prevalence of underweight, stunting, and wasting was 24.6%, 32.4%, and 16.3%, respectively. The mean ICFI scores (13.0) of children aged 6–8 months were better than those of children in other age-groups. In food groups, the intake of fish was higher among the respondents, whereas the consumption of vegetables and fruits was lower. Infant and child feeding index scores were significantly associated (P < 0.05) with WAZ and LAZ/HAZ after adjustment for confounders. Overall, the findings showed that Maldivian children consumed the limited number of food items that resulted in an inadequate intake of nutrients which further resulted in the high prevalence of malnutrition.