Malaria age-group–specific death rates in African INDEPTH sites, 2000–2012 data represent malaria deaths in almost all African INDEPTH sites from the combined periods of 2000–2005 and 2006–2012. The sites include Burkina Faso one (Nouna) and two (Ouagadougou); Cote d’Ivoire (Taabo); Ghana one (Navrongo) and two (Dodowa); Kenya one (Kilifi), two (Kisumu), and three (Nairobi); Senegal (Bandafassi); South Africa one (Agincourt) and two (South Africa Centre), combined because of small numbers of deaths; and the Gambia (Farafenni). The Ethiopia site was excluded because only 13 malaria deaths were reported for the entire period, and the Malawi site was excluded because it did not record child deaths. Malaria death rates were calculated by dividing the sum of weighted likelihoods by the sum of person-years across periods for each site and age-group (black squares). The red triangles represent the median value across all sites for each age group. Data come from INDEPTH (2014). Weighted likelihood and person-years are taken from the INDEPTH data set. The 0–4 years age-group excludes neonatal deaths (age 0–1 month). For more details, see 12. Data source: INDEPTH Data Repository (https://www.indepth-ishare.org/index.php/catalog/48). *Mortality rates were estimated using INDEPTH data and the same method as described by Streatfield et al.12 †Total person-years of exposure for all individuals under surveillance in the particular year, age-group, and gender. This figure appears in color at www.ajtmh.org. 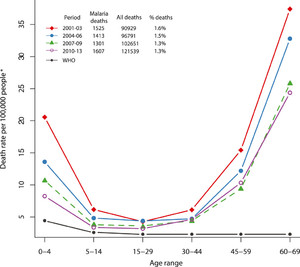 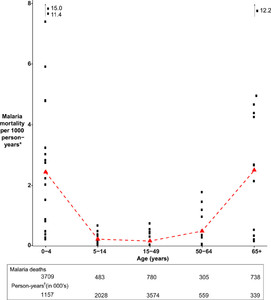 Is Malaria an Important Cause of Death among Adults?

A long-held assumption has been that nearly all malaria deaths in high-transmission areas are of children younger than 5 years and pregnant women. Most global malaria mortality estimates incorporate this assumption in their calculations. In 2010, the Indian Million Death Study, which assigns cause of death by verbal autopsy (VA), challenged the reigning perception, producing a U-shaped mortality age curve, with rates rising after age 45 years in areas of India with substantial malaria transmission. Similar patterns are seen in Africa in the International Network for the Demographic Evaluation of Populations and Their Health (INDEPTH) network, also relying on VA. Whether these results are accurate or are misidentified deaths can be resolved by improving the evidence for assigning causes for adult acute infectious deaths in high malaria transmission areas. The options for doing so include improving the accuracy of VA and adding postmortem biological evidence, steps we believe should be initiated without delay.