Tornado diagrams of the one-way sensitivity analysis for the comparison of the treatment strategies using PQ7 to usual care. The black vertical line corresponds to the baseline ICER in each country, and the colored bars correspond to resulting ICER when each parameter is set to their lower or upper value (base and range values provided in Tables 1 and 2). DALYs = disability-adjusted life-years; G6PD = glucose-6-phosphate dehydrogenase; PQ7 = 7-day high-dose primaquine; PQ14 = 14-day low-dose primaquine; RDT = rapid diagnostic test; TQ = tafenoquine.

Cost-effectiveness acceptability curves for the comparison of the sex-based treatment strategy with tafenoquine for males and 7-day high-dose primaquine (PQ7) for females to usual care. 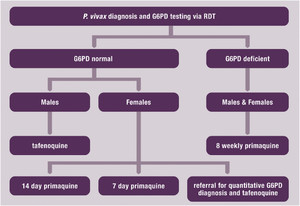 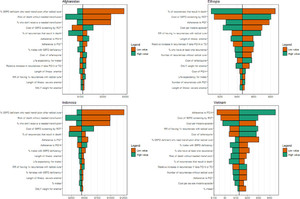 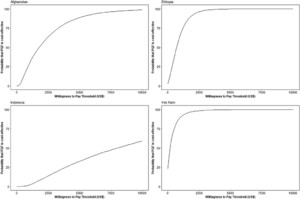 Tafenoquine has been licensed for the single-dose radical cure of Plasmodium vivax in adults; however, it is only recommended in patients with > 70% of normal glucose-6-phosphate dehydrogenase (G6PD) activity. Because this may hinder widespread use, we investigated sex-based treatment strategies in which all adult patients are tested with a qualitative G6PD rapid diagnostic test (RDT). Glucose-6-phosphate dehydrogenase normal males are prescribed tafenoquine in all three strategies, whereas G6PD normal females are prescribed either a low-dose 14-day primaquine regimen (PQ14, total dose 3.5 mg/kg) or a high-dose 7-day primaquine regimen (PQ7, total dose 7 mg/kg), or referred to a healthcare facility for quantitative G6PD testing before prescribing tafenoquine. Patients testing G6PD deficient are prescribed a weekly course of primaquine for 8 weeks. We compared the cost-effectiveness of these three strategies to usual care in four countries using a decision tree model. Usual care in Ethiopia does not include radical cure, whereas Afghanistan, Indonesia, and Vietnam prescribe PQ14 without G6PD screening. The cost per disability-adjusted life-year (DALY) averted was expressed through incremental cost-effectiveness ratios (ICERs). Compared with usual care, the ICERs for a sex-based treatment strategy with PQ7 for females from a healthcare provider perspective were $127 per DALY averted in Vietnam, $466 in Ethiopia, $1,089 in Afghanistan, and $4,443 in Indonesia. The PQ14 and referral options cost more while averting fewer DALYs than PQ7. This study provides an alternative cost-effective mode of rolling out tafenoquine in areas where initial testing with only a G6PD RDT is feasible.