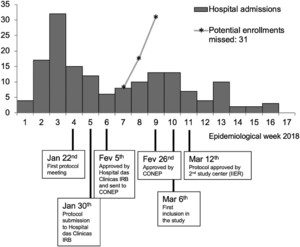 Confronting the Multidimensional Challenges of Research in the Context of Emerging Infectious Diseases in Brazil: The Example of Yellow Fever

In the most recent Brazilian yellow fever (YF) outbreak, a group of clinicians and researchers initiated in mid-January 2018 a considerable effort to develop a multicenter randomized controlled clinical trial to evaluate the effect of sofosbuvir on YF viremia and clinical outcomes (Brazilian Clinical Trials Registry: RBR-93dp9n). The approval of this protocol had urgency given the seasonal/short-lived pattern of YF transmission, large number of human cases, and epidemic transmission at the outskirts of a large urban center. However, many intricacies in the research regulatory and ethical submission systems in Brazil were indomitable even under such pressing conditions. By April 2018, we had enrolled 29 patients for a target sample size of 90 participants. Had enrollment been initiated 3 weeks earlier, an additional 31 patients could have been enrolled, reaching the prespecified sample size for the interim analysis. This recent experience highlights the urgent need to improve local preparedness for research in the setting of explosive outbreaks, as has been seen in the last few years in different countries.