Egg count distribution for soil-transmitted helminth infections and schistosomiasis after Kato–Katz and urine filtration examinations, respectively, showing ascariasis as the infection presenting with the widest distribution in the number of eggs. 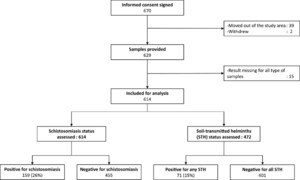 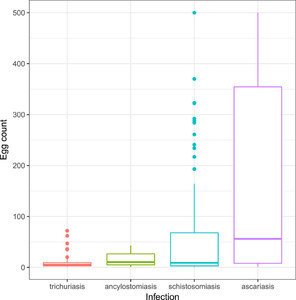 Epidemiology of Schistosomiasis and Soil-Transmitted Helminth Coinfections among Schoolchildren Living in Lambaréné, Gabon

Schistosomiasis is a parasitic infection highly prevalent in Central Africa where it is co-endemic with many other parasitic infections, including soil-transmitted helminths (STHs). For its optimal control, there is a need of descriptive epidemiological data for each endemic region. The objective of the present study was to determine the epidemiological situation around schistosomiasis in Lambaréné, Gabon. A cross-sectional study was conducted among schoolchildren. One urine sample per day was collected on three consecutive days for the diagnosis of schistosomiasis using a urine filtration technique. One stool sample was collected for the detection of Schistosoma spp. and STH spp. eggs using the Kato–Katz technique, and for larvae, using the coproculture technique. A total of 614 schoolchildren were included in the analysis. The overall prevalence of schistosomiasis and STH infections was 26% (159/614) and 15% (70/473), respectively. Human–freshwater contact was the main risk factor for schistosomiasis in the area (relative risk (RR) = 2.96 [2.20–4.00], P < 0.001). Hematuria (RR = 5.53 [4.30–7.10], P < 0.001) and proteinuria (RR = 2.12 [1.63–2.75], P < 0.001) as well as infection with Trichuris trichiura (RR = 1.86 [1.33–2.61], P = 0.002) and Ascaris lumbricoides (RR = 1.96 [1.19–3.21], P = 0.039) were associated with an increased risk of schistosomiasis. Trichuris trichiura was the highest prevalent STH species in the area. Our study reports a moderate prevalence for schistosomiasis with human–water contact as the main risk factor, whereas the prevalence of STH infections appears to be low. Our results stress the need for the implementation of WHO recommendations for schistosomiasis control.