Estimated test prevalence against estimated disease prevalence when circulating cathodic antigen trace was considered negative (left) and positive (right). Estimates are from the output of a Bayesian latent class analysis and the cloud of dots for each test show 1,000 estimates from the posterior distribution. 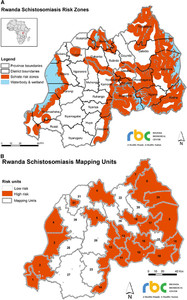 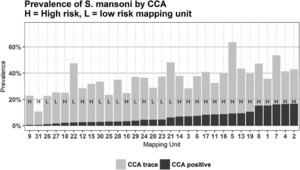 The field standard for the detection of Schistosoma mansoni infection is Kato–Katz (KK), although it misses many active infections, especially light infections. In 2014, a reassessment of S. mansoni prevalence was conducted in Rwanda using the more sensitive point-of-care circulating cathodic antigen (POC-CCA) rapid assay. A total of 19,371 children from 399 schools were selected for testing for single urine CCA. Of these, 8,697 children from 175 schools were also tested with single stool double-slide KK. Samples from eight of these 175 schools were tested again with CCA and additionally with the highly specific and sensitive up-converting phosphor-lateral flow circulating anodic antigen (UCP-LF CAA) assay. Latent class analysis was applied to all four test results to assess sensitivity and specificity of POC-CCA and estimate the proportion of trace results from Rwanda likely to be true infections. The overall prevalence of S. mansoni infection in Rwanda when CCA trace results were considered negative was 7.4% (school interquartile range [IQR] 0–8%) and 36.1% (school IQR 20–47%) when trace was considered positive. Prevalence by KK was 2.0% with a mean intensity of infection of 1.66 eggs per gram. The proportion of active infections among children diagnosed with CCA trace was estimated by statistical analysis at 61% (Bayesian credibility interval: 50–72%). These results indicate that S. mansoni infection is still widespread in Rwanda and prevalence is much underestimated by KK testing. Circulating cathodic antigen is an affordable alternative to KK and more suitable for measuring S. mansoni prevalence in low-intensity regions.